On the ordnance survey map, the site on which Harmony Hall stands, was covered in oak trees. And now it is again...and more. 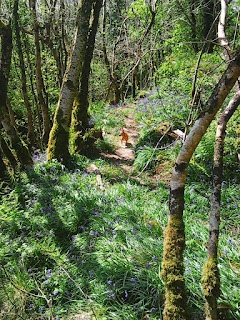 
It started with this declaration by Kilkenny Council of a Biodiversity Loss Emergency. Someone said in passing…if we all just stopped mowing it would create considerable habitat for wounded bees returning from the sprayed fields…I just added that last bit about the bees for the warzone effect. 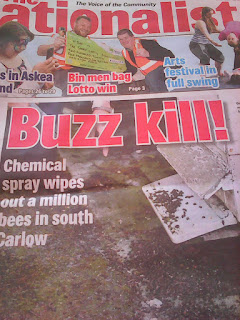 Anyway, then the fairies started playing up in the fort on my neighbour’s land. They were never going to get a result out of them as they are barely compus mentus, let alone conscious. I imagine why they got on my case. They said very specifically stop mowing. 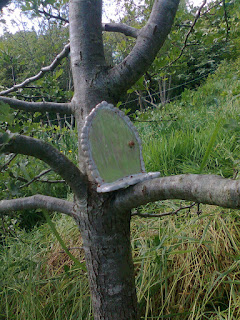 Give Up Your Lawn?


You know and I know that mowing can end up as the one and only bit of gardening one does each week. At least if there’s that one patch in order, it makes all borders, beds and other areas that need attention look as if they’re meant to be like that. 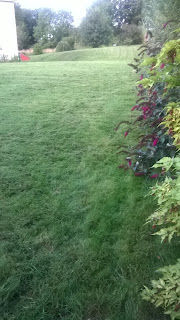 
I didn’t mention the fairies, instead I thought about how I could make such a viable and beautiful alternative to a mown lawn that everyone would want one; I’d convert everyone by designing and executing a genuine way forwards, if different from what we’re all conditioned to look for (I refer to the woman in Kilkenny Castle who complained about the verge left wild for the bees and was worried standards were being woefully let slip).


I reminded myself how to draw a labyrinth and planned one with natural paths and defined by lavender and other herbs. I looked at Camomile lawns and edible lawns that I learnt about through foraging. 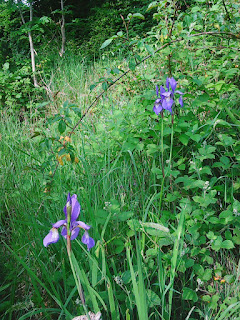 Suddenly it dawned on me to not do anything with other people and their lawns in mind. No one has ever and/or is likely to be influenced or inspired by things that I test drive here at Harmony Hall. How do I know this? Because I became vegan in 2002 and have been radiant and expressive about it since to no avail. 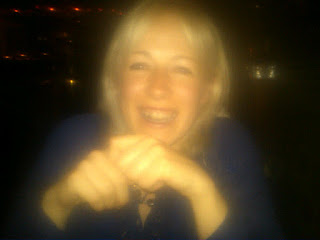 
I learnt how to communicate with animals. I asked a dribbling cow in Conahy why she was dribbling and she said, 'I am kept in a constant state of pregnancy and lactation. There is no opportunity to gather myself and bodily functions. I do not even have a calf with me'. I asked where is your calf? She said 'Down there, can’t you hear him? He has one of those bars through his nostrils to stop him suckling on the other calves and he is currently stuck in some way to the feed trough. Would you help him?' So yes, there he was and I was able to free him. I never drank milk again. It was obvious to me it was none of my business. 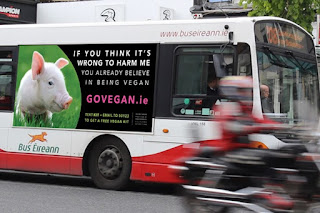 A True Master (Or Mistress In This Case) Harms No one

I had given up eggs one year before, fish two years before that and meat four years before that. When I learn how harmful something is – to me or someone else, I let it affect my behaviour and choices. I don’t hold on to things because I like them. As people say to me ‘I love my meat’…what sort of reasoning is that? It is so ignorant I’m constantly amazed by every word in that sentence.

Studying Animals, as a riding instructor & carer of horses, pigs & all and sundry

So, very far from people even trying to justify themselves or doing anything to reduce the violence in the mass rearing and slaughter, instead the onus comes back on me to explain why would anyone eat plant-based.


You can transmit compassion but you cannot elicit it ... dammit!

So, now years and years later, I’ve moved on from trying to wake people up to the suffering of animals. I’ve moved on from teaching people how to break free of their chains of addiction to self and health-sabotaging patterns, including eating habits. I’ve moved on from sharing my understanding of how everything in nature is connected and how we can reconnect. I’m ridiculously well informed about the environmental and health and financial impacts of shifting from animal agriculture to organic crops as a way of land management too. Caring about the animals wasn’t enough.

No one wants to know. Few even listen, seek to understand let alone believe me or think that there is any importance, insight or knowledge in my words. Instead, they think I’m a pest; judgemental, negative, too soft, radical, extreme. I have been called all these things. But there is nothing extreme about me. I sit here and I think through the problems that we face, as a whole or the individuals that come by, and I summon a solution. Things are obvious to me. The instructions are gentle, steady and actionable. I share what I find out and hope for the best.

This year has been better - a letter published in the paper and I've had replies to emails from government and council departments. Also, some horrible things that were set to happen didn't happen thank God, like the capture of hares for coursing. Still, the conscious undercurrent rising amongst us is only receiving crumbs. Crumbs of results from the table of bad decision making and big money deciding things from on high. All the good people doing brilliant things are still presented with endless obstacles to keep them busy (I refer to the competent builder only allowed to put a compost toilet into a new-build, on condition he installed a normal one beside it with connections to septic tank etc defeating the whole object).


I’m not going to do anything costly like buy lots of plants. I'm not going to hire machinery to clear the grass. I’m not going to read anything lengthy on re-wilding or creating a forest garden, or what weeds are noxious and which not (I only mentioned Ragwort's status as a notifiable, fine-able abundant plant as a creative way that a project could raise money to do something more constructive for biodiversity recovery)


I am practical. I must not get distracted by internet or advice. So, my approach is to plant what I have and what I can find, out in the lawn: Either 3 or 5 plants every day. I have done it for two weeks now. And whose approval do I want, no one’s. But whose approval have I got? The bees. The place is humming, more and more every day. And yes, I’m feeding the wasps too. They are struggling for something sweet and so they get the apple cores at one end of the bird table and the birds get their seeds at the other. There is not yet enough insects, beneficial or otherwise, to keep the birds going – even in the summer - but it’s no stress for me to feed them. 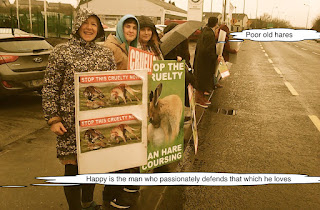 
Everyone else can do what they want, including ignoring what they want to and focussing on what they want, too. I've seen lots of people spraying their bit of tarmac with weedkillers and council and road workers butchering the hedges in nesting season and against the law. Endless lorries of God forsaken animals pressed against the bars and wee spraying out in buckets of fear over the cars behind. I'm not rising to it anymore. Another thing I've learnt is that, if you're an activist, an advocate and political then it's got to be matched by creativity and the sweet things in life: Dancing, music, hugs, singing, period dramas and all things with a happy ending.

How do I decide what goes where? Well, I want to create a nut orchard – a crucial protein and valuable crops if they get going, so I had planted a walnut tree a few months ago. This releases juglone via its root system that kills other trees or stops them thriving, so I looked up what could go near it! Cherry trees (Prunus) are fine and oak (Querkus) are fine, so I put in my little cherry trees I’d started from the stones and my bigger one that I’d had in a holding bed. There were already two lovely oaks from the oldest oak in Ireland, started by Sean Og and one started by my horse, Windy and rescued from his field with just two leaves on it and then a few left over from brilliant substantial plantings nearby.

block light from the house or obscure the view. The the Crab Apple and mini apple trees (Malus) I have put there – a different place altogether and a safe distance from the Walnut! The exact spot, to dig each time, is identified by a dock leaf. I do like nettles, comfrey, plantain, dandelions, clovers red and white, wild orchids and daisies are welcome too but I’m digging up the docks and the thistles. I put the earth and the worms safely back and tuck in a few bulbs or a strawberry plant or two or a shrub or a bit of mint or some chives, even a few sprouting potatoes because, basically…who is going to stop me? 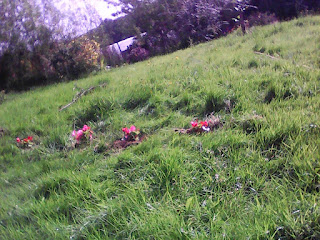 It might look dodge and it might take time but it's going to be an unprecedented array of flowers and blossom and berries and scents. The grass will back off under the new trees and everything else is perennial and so will return each year and spread; big and small wild strawberries, raspberries, currants, herbs, vegetables, grains, willow for biochar. Anyway, the grass will recede or take back over but in the meantime I get to live by my values, beliefs and conscience. That is the greatest freedom of all.

Well, that and being awake as most people sleep walk into a totalitarian state - (Freya Lawton of The Peace Intention pointed this out so she understands it better than I. In fact I don't know what sort of state that is but I've witnessed a lot of people in a total state so that's close enough) It's so important to stay creative and empowered. The other options seem to be waking up and getting totally depressed and disempowered by what you see. OR staying in denial!

Posted by Healing by Franc at 6:46 PM