Sybil is a lot better 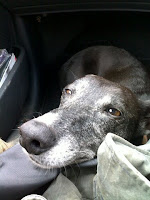 Clearings for the day!

Forgiveness - all relationships and practice on passing traffic if that's easier!

Breath - Be aware of breathing deeply and with relish for the great oxygen scene and then out with joy.

Plentiful money - Old, internally-held conflict blocks financial security and creativity. Consciously release any
conflict between giving and receiving, even if you're not sure there is any. I bet you 50p there is.
conflict between spiritual wealth and physical finances. Even if your spiritual life and healing isn't your priority yet, if you get these two in alignment, you'll find yourself effortlessly in more fulfilling work that more fully expresses who you are and brings in a happy livelihood.

Desire - Focus attention on heart's deepest desire and give it up to the universe to manifest. This is an interesting one. Its an opportunity to think of something new but one finds oneself thinking of something old by mistake. Might need some more work!

These are my recommendations for the day. Its so sunny everything is possible.
I have also been clearing for beloved Sybil the rescued lurcher. She had a block in her intestine which has now gone miraculously but is still a bit down on her luck. Please hold a big resolutionary space for her too!
Posted by Healing by Franc at 6:00 AM No comments:

There seems to be three ways we can deal with karma. Pay our karmic debts by repeated suffering is the one that many seem to be picking! Or we can transcend it via a spiritual life. This involves a necessary denial of our physicality as when we lower our vibration to deal with bodily and emotional experience, the karma crops right back up again. My preferred method is transmuting karma. This involves acknowledging the source of it - often many lifetimes ago - and taking responsibility for it. Responsibility is a heavy sounding word. Rather than stopping at the 'God, I must have done something really bad in a last life' conclusion, we can actually move on. About time too, I reckon. As with all clearing, we get to the source by noticing the patterns of difficulty in our lives. These can be changed moment by moment.

On the other hand I also believe that karma is just another grand part of the illusion. You might argue that the western world doesn't really buy in to it. There's not much talk of past lives and suffering a penance. I still think its an important clearing for that exact reason. We've not been acknowledging our behaviour even in this lifetime.

Just ask the pendulum if you still have a lot of karma to clear! People seem to have buckets of it! Quite apart from the karma we arrived on the planet with, why does everyone keep creating more? One example of this denial I've noticed is any conversation about being vegan. People always go 'that must be hard' they never ask 'why?' The only conclusion I can come to is that people know well why but just can't go there. Can't align themselves with information that requires that they change.

Well, I'm afraid to say that that is exactly what's called for. We can clear ourselves to our hearts content but we must then stem our destructive, ignorant and unhealthy behaviours as we spot them. Clearing leads us to greater awareness of ourselves and what we're creating and perpetuating in the world. For me it has led to effortlessly giving up whatever I notice that doesn't do us or the planet good. Then it only remains to familiarize and align ourselves with experiences of vitality, our one soul and love.

I understand that the clearing process might not lead to veganism. It might lead to different life choices for each person. Go on, admit it though, its quite likely that the confining and death, pollution caused, dairy-linked disease, crops and water wasted and karmic consequences are vibrations we might all do well to leave behind.

There, I've said it! I'd like everyone to become vegan. The musician Moby asked Al Gore why he hadn't mentioned the necessity of a vegan way of life to slow global warming and he answered, 'I know, I am myself but the American people wouldn't listen. He said he could maybe persuade people to drive a hybrid car but not that.' I realized I have been doing the same thing. Just not mentioning it or saying things like 'every one to their own' when really I think living vegan (in the sense of living as harmlessly as possible) is a bit of a must for any awakening consciousness. Otherwise your conscience stays heavy and your vibration low to keep the denial in place. Much better to create a fluid sense of self, letting old ways go, adjusting, adapting and strengthening our bodies and minds to be home to ever-increasing compassion, healing and intelligent engagement.
Posted by Healing by Franc at 6:51 AM No comments:

Workshop in Partnership, 15th May - Smoking!

Quit Smoking for Good
Saturday 15th May - 10am to 5pm
Hypnosis - Margaret Denmeade - and Clearing - Yours Truly
€150
For the same price as a one off hypnosis session, this will be a whole day of hypnosis and energy clearing with experienced hypnotherapist and Reiki Master, Margaret Denmeade and I. Without exception we can find the source of the motivation to smoke and clear it. Energy Clearing will also be taught as a tool for healthy management of stress. Lunch will be provided. The group will provide a buddy system for continued support.

Please mention this to anyone you know who's still smoking.

Thanks alot!
Posted by Healing by Franc at 9:44 AM No comments:

Incarnate or not incarnate is all the same to us

A stillness underlies everything, all movement is only an illusion that we buy in to. Nothing is ever born or dies. If enough people agree with you that something is happening, its called true. If nobody does, you're called mad. In reality everything stays the same.

Nonetheless, several people agreed that Windy had a birthday today, his 20th no less, so lets celebrate.

We can not at first understand or realize this stillness. I only mention it to plant the seed of this understanding. We will not recognize the seed from the trees that grow out of them. They will have gone for good. All we can do is
1. Put in place the possibility that we are all one big ocean of energy.
2. Realize for a time every day that this associates us with the elements and the most limitless examples of people and animals and natural phenomena. We are no greater or lesser.
3. Systematically shed our resistance to growth.

Worth a go surely!
Posted by Healing by Franc at 1:32 PM No comments: