So, anyway! Where was I? Oh yes, the present moment!

Look how far we have strayed from it and what we have created. We are in a state of perpetual reaction. Can hardly make a considered judgement to save our lives (as the saying goes…and literally). Take food for example. We were all talking about the population being poisoned by their own hand, unable to get food that was not sprayed repeatedly with pesticides. Then people stepped back and called it a success if the food wasn’t GMO (ie. plants bred to tolerate massive amounts of pesticide and then sprayed as often as wanted) Then a few people wanted a change from factory farming but any attempt to raise awareness of what happens when you intensify animal agriculture has been stifled under the ag gag laws (you can go to prison for even taking a photo of a farm from outside the perimeter fence).


And now? Now we’re in danger for just existing. Nevermind the grub we can get hold of. As my friend in Minneapolis said to me the other day, ‘We’re really trying but when I cut open the apples for the kids, the red dye is just pouring out of them."

This is something I had not even heard of. I knew things were picked before they were ripe and artificially ripened and waxed so they never go off but really, nowadays, you just can’t sweat the small stuff. If you have the wrong face or are in the wrong place and the wrong time, you are in trouble.

However, we only need to do two things. Slow down and make our choices consciously. How do we align our choices to our vision, ie. move in the direction we want to go, moment by moment? Can we even still do that? I believe we can. There is, though, a lot to understand (about yourself) and sort through (for dynamics of truth or habit) and the only way to do it is slow down (or in the words of the sign I made for the corner of the road near here:
Slow Up FFS – with small images of each of the animals! Although I can't find it now to share a photo so maybe it was stolen!)

We need to first notice when we are making a choice and then we need to reflect on them. We don’t need to be right ... but we do need to let go of the need to be right…oh yes and we must still be able to stand by our decisions with conviction. And finally, if it does turn out to be an error on our part, view that with compassion for our fallibility and take responsibility for it too. Can you get your head around all that?! I have heard that we make thousands of choices every day but don’t be overwhelmed. Just be grateful.

For every choice that you realize you have, you are celebrating the freedom to make it.  One thing we talked about at the retreat was no longer having to make decisions. We should let our higher self make them for us, as they have the extra perspective. This ties in with the idea of ‘getting out of the way’ and ‘letting the process unfold naturally’, which are very difficult things for a restless mind to do. On the one hand it gets stuck in inertia and disillusionment. On the other, it strives and pursues objectives, as if they are going out of fashion…or as if we are running out of time!

As I’ve been an advocate so long, I can hardly yet imagine not responding to those in trouble. However this is what I have to do. We were asked, are we prepared to drop every idea of who we are in order to become who we really are? We can trust that one thing at least will work out better all around; looking inward, taking the power back, not eating anything that is dead or contaminated but residing in a headspace of intentional actions followed by intentional inaction! Yes our intentions must be towards what we want, not what we don’t want. Hold those visions in the crucible of our hearts and emanate the joy and peace they bring, out into the world, but also have patience…in case they don’t materialize overnight!
Posted by Healing by Franc at 12:04 PM No comments:

A Spiritual Retreat to Restore Body to Soul - Everyone should come next time!


For those who need a couple of days away, to remember how to quieten their thoughts, but never quite take them...don't worry! That is you and 99.9% of the population. Luckily, I am a multi tasker - able to both take time out and take good notes.

The other good news is that you don't need days, you can start this minute. Pause in whatever you're doing and be cheered by the thought that there's the busy you but then you also have a higher self, your spiritual dimension that is, thank God, still connected at both ends; to your source and your body.


This spark of illumination, this second aspect of being that every single one of us has, has all the answers, all are for your highest good and will not leave you out on a ledge. Reflect on where being a strict individual has got you? The loneliness of living in your mind, seeing everyone as separate and weighing up good and bad and feeling unnerved by the inbalance? I liked the statement that your mind is a great servant but a bad master. Put your heart and soul in its place and let them drive for a while. 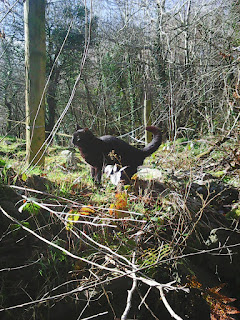 Set an alarm if you need to, to break the spell of identification with your thoughts. Lively Up Yourself  with a little music or a salute to the sun and then listen for that second voice, the wise one. I bet you it will whisper things like patience, peace, thank you, everything is okay, you're well able for this and calming, friendly things like that.

We learnt how to make friends with the present moment. Why? Because that is all we have. It makes sense that a string of contented moments will amount to a contented day, will overflow into the cellular structure of a contented body and overflow further into the creation of a contented environment.


Probably few enough will be regular users of the word contentment so let me reverse it. If you hold resistance, resentment and stress to the present, past and future, respectively, that will surely also overflow into tension in the body and conflict in your environment


But just because you've been a bit of a pessimist all your life, or had horrendous luck doesn't mean that you can't change your frame of reference right now. In fact it is imperative you do if you want to make changes or be a loving input in anyone's life. So this is another paradox: you must have mental discipline not to stay with a negative thought as if it were the truth. It can only ever be the truth of your limited self, stuck in memory, stuck in form, stuck in a state of anxious alertness. Your real truth is that you are a lot more than that. You are here for a reason and we had better get on with finding it.

Therein lies the other paradox. Don't venture inside yourself with a view to finding something inparticular, like healing or the great motivation to get fit or run a proper business or get a qualification. Any one of these things or more might come about but the process must be expansive and not goal orientated. What's wrong with goal orientated? You are going into pass/fail territory! What is right with spending time listening to your inner guidance and intuition? You will gradually realize who you really are and your life experience will be a million times what it was:


To this end, I am no longer preparing food, clearing others, offering B&B, identifying with some lengthy job of being an advocate and activist. If you want to know what I think about things and how to transition and how to build your awareness of your divine spark, receptivity and compassion, I know for a fact I have written, painted and talked enough. If you want to remain indifferent to your own suffering or the suffering of others, good luck with that.

Start where you are now. When I went for walks far and near, I ran into anger and violence. Stop going out into the world looking for things. It was also pointed out to me that I had built a bridge clean across my own possibilities of love and happiness (Whoops, well everyone has a blind spot! Thanks Freya of The Peace Intention) So, I woke up to the sunshine and saw that in all ways I needed to explore my inner landscape and get right back in to the stream...however tentatively, I should put my wellies on, even if they did not turn out to be waterproof anymore and just pick my way through the rapids and falls and sparkling water. I thought I would find lots of dirty rubbish on this walking meditation which I feared would spoil it. I didn't find any. Just one saddle pad of Windy's, still inflated, two clean bottles and a steering wheel that came away no problem. So do not fear that if you 'go inside' you will find lots of toxic dark emotions as you may well find beauty beyond measure. 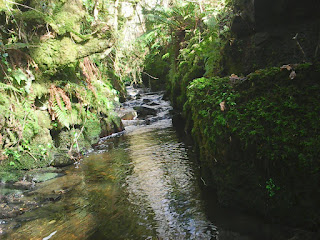 Also practice objectivity, not judging who and what turns up, on the way. For example all the animals showed up and Dakota was always there, pushing me down waterfalls and chasing a cat (who she's already banished from the house) and generally being the only one there apart from Cupid who's a perseverer and Don Juan staying way up high on the bank just in case. I love all the animals and love to watch them play and generally interact so a moment of irritation came, followed by a question: What does she represent that she so dominates the landscape? I realized in terms of my inner landscape how I make allowances for all the subtle energies and interplay of my ideas and emotions to be sidelined by one big babyish emotion - represented by Dakota taking up central space and needing attention!!


If you approach everything in life as a gift of insight, you will reach full awareness, your true nature and find your way home. It has got to be worth a go, every moment or so!

Posted by Healing by Franc at 10:43 AM No comments: