Discussion: Why do we deny farm animals basic needs? 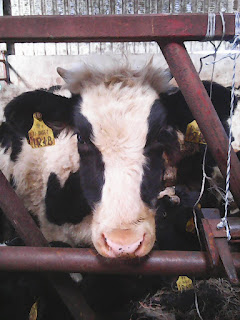 As everyone knows, all I want is for every living thing to be acknowledged and respected. So forgive me if I don't really honour many meat eater's in my writing. I have my hands full trying to get around to honouring all the unseen animals on farms and in labs. All the meat eaters can just honour each other can't they and leave me to my work. I also feel a person's mind has to work really hard to ignore the harm one's doing. It either has to maintain total denial of the lives affected by eating meat, dairy etc or the mind has to keep a person completely convinced that their life is more important than others'. 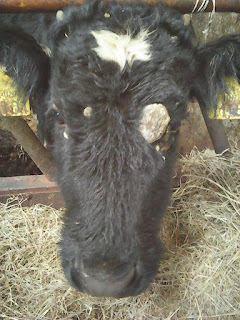 Why is it so difficult for people to realize that human life is not superior to any other life? Technically, that is just how reality works. I am not talking as an animal lover, as if there are a variety of view points, but literally. In answer, my friend suggested that it is because the majority of people are not getting their own needs met in any shape or form and so they do not have the head space to care about others. What are those needs, I asked her. I think these were formulated by Tony Robbins. 1&2 Certainty and Variety (almost opposites), 3&4 Connection and Recognition as a unique being 5&6 Growth and the opportunity to Contribute.
These are some cow friends of mine, they will be in this barn less than one foot from each other for the next six months, with no bedding, minimal daylight, two automatic drinkers from which they will never be able to take a deep drink and which no farmer will be able to see if any of them are not drinking (ill), coughing with colds and mild pneumonia from the freezing nights and some intense ring worm that will drive them no doubt mad. And this is a kind farmer, doing his best for the animals. 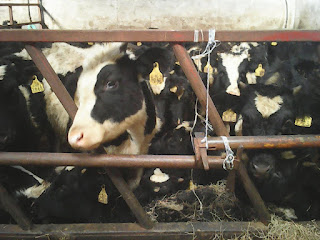 So while we're busy craving basic needs do we have to deny animals them? No certainty that they are even safe. No variety or even step outside. No connection as they were taken from their mothers within days so that others could drink their milk. No recognition that each life is unique - there are 100 here, 50 there, a few thousand somewhere else. They have a number, never any genuine recognition. No chance to grow - they can only live until 14 months now so they're not too tough to eat and their chance to contribute is not even considered. That is the conversation I would really love to have: 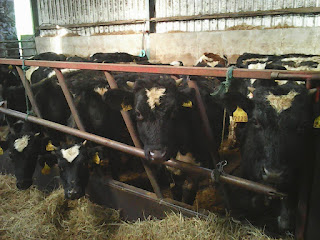 How can cows, pigs, sheep, chickens, goats, horses etc contribute while being allowed to live for their own reasons. I have heard of cow muck providing such heat that a biodigester process could provide energy for a whole neighbourhood. But then another friend said how would the muck be harvested if the cows weren't insanely confined and standing on slats, which is no improvement on their lives, except getting to live longer? I seem to remember that chicken manure is amazing for growing mushrooms. I think there are many biodynamic systems that manage biodiversity and productivity equally. But please, let's put our heads together and pool ideas on how we can live side by side with others, all others. 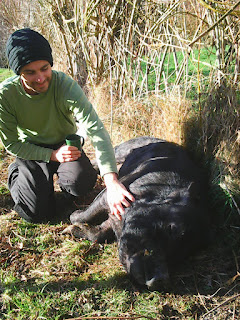 We are all reflections of each other, part of a whole ecosystem.
So I enjoyed the conversation of the last few days and appreciated people's comments thank you! Just to clarify, I do not advocate putting a vegan murderer in power (Charles Manson) or support rants that propose violence by Gary Yourofsky - but I was more sorry to hear that he'd lost it a couple of times and let himself down as I have heard at least three of his talks and he is a very good voice for the animals and clearly a pascifist in his actual behaviour.

This is activist Angela Davis pointing out the absurdity of the question does a movement of change require violence. She points out that, rather, it was the violence that necessitated the movement of change. She actually says that the question shows how little the reporter knows on what people had actually been through on racial grounds. Just think about the amount of violence that has been shown to animals. The scale is gigantuan and no parallel for a threat passed in frustration by an activist

I do not even want to be right. I bet most people don't particularly want the meat industry, pharmaceutical and chemical industries to thrive. I just want everyone to be alright enough in themselves to recognize their brother in everyone they meet and make sure everyone is treated well.

Posted by Healing by Franc at 7:55 AM