The Quality and Intent of Fine Gael Leadership 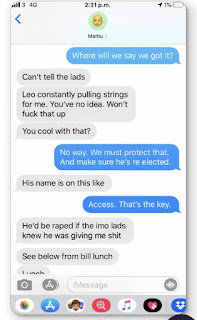 "Leo constantly pulling strings for me, you've no idea".

To be in government you must be a public representative. Leo Varadkar is a private representative. He has to be sacked. A person without remorse doesn't resign. Varadkar was specifically in charge of Irish people's welfare as Minister for Social Protection and right up to managing the Covid Emergency Payment and he has shown no mercy, let alone responsiveness.

Deny him the creature comforts of a massive state pension. He, Donoghue and Simon Coveney have 'led' Ireland into disaster over several years. Only Donoghue hasn't been officially exposed yet but someone will soon outline his horrendous betrayal of the country too, in his puppetry role for the banks. (Note to self, must find out who run our pillar banks as keep letting them off as a faceless institution when there's people making cruel decisions in there, or at least accepting their artificial intelligence as gospel).

This is much worse than Phil Hogan who was ONLY (!) minister for our environment and then all Europe's agriculture and probably wanted to retire anyway.

Read this text 3 times and ask yourself if Varadkar should be sacked. Blatantly sabotaging us, GPs & the Irish Medical Organisation (IMO) #FireLeoVaradkar #CorruptioninFineGael

Vote of no confidence? Total traitor I'd go as far as to say

Taoiseach under fire from own party for not sacking him.

Anyone noticed that even when you look up Who's Taoiseach? Leo Varadkar's name still comes up for the first 20 hits? It's Leo Varadka's ego has even infiltrated the algorithms

Shameless Leo Varadkar's  still more annoyed with his friends than aware of his own behaviour.

Posted by Healing by Franc at 2:06 AM