Should we be driven or relaxing right now? 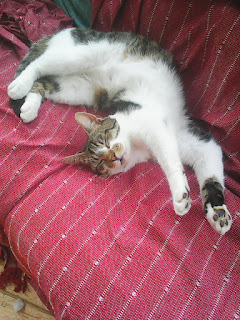 Today, I have been considering how humans are the only 'driven' species. Yes, we can call it a ‘self determining’ species but I’m not so sure we are determining and deciding how we spend our days and consequently our lives. It is like we are driven by some invisible force shouting in our ears; do more, clean up, apply for that, take more exercise, cook something, do the shopping, ring everyone who might need to hear from you, apologize for that, work out how much money you’ve spent, be creative…And all the while, the cats sleep in two or three different positions around the house and garden. The pigs visit the pony then sleep in the shelter of the hedge, then forage a little by the stream. The dogs chew their sticks on the off chance I want to get involved in the game. The pony sunbathes standing up and eyes closed, pretending he doesn’t notice what everyone else is doing. 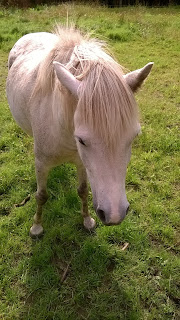 Me? I cut 500 willow fronds from my epic hedge. I dig over two beds and plant flower and veg bulbs, on the off chance that it is not too late to put them in. I cut out endless strong brambles and rotting montbreti leaves to make way for the emerging geraniums. I clean the house, light the fire, carry in the animal feed and coal. 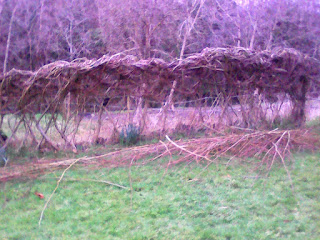 I make dinner, try a raw banoffi pie, analyze why a gluten free banana cake was amazing the first day and not so nice at all the second, send messages to lots of friends and family, meditate, levitate, land and set off again, to re-wire the DVD player…total success! And think about who to invite to the Exhibition Opening on the 9th March, in the Café Kitchen in Bray. I have a glass of Guinness (thank goodness that is vegan now) and even watch the first Twilight to celebrate the newly working old technology. 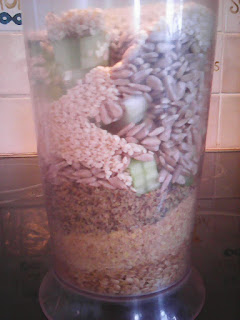 Is it possible that we as humans have lost the run of ourselves? Gone too far? Perhaps we should be practicing stillness more? Patience? Wait for things to unfold and not keep going so much. It just doesn’t feel in keeping with nature and when I look around, no one else at Harmony Hall is doing it. They’re just chilling out and living. Interacting and playful. Yes, sometimes they bicker but only for a few moments. They don’t go around with their heads wrecked by the contratemp! And there are as many cuddles and laughs and shared investigations as there is argy bargy. I take some credit for this at least because recently I cleared the power struggle that had dominated this place since time immemorial. Now, I reckon, I’ve got to learn to play well with others myself and practice less striving more arriving…or whatever that nice phrase was!

For the moment, I carry stuff around mentally for days sometimes - currently the conundrum of getting organic pig food. I had to go in several times to order it. I had to be thankful that they could still get it as they have stopped the organic horse nuts. Then I have to put up with it being called pig finisher - just so some brute can make the pigs into sausages. Then I have to question whether they're as much of a brute as the non-organic pig farmers as at least there are standards of welfare and of course food that are better on organic farms. Maybe I'm being unfair to someone. Pretty sure that everyone eating meat still is alot more unfair though.

I think the key is to be sure we are governed by our souls rather than driven by ego need. We will know the former as it will be accompanied by an inner peacefulness.
Posted by Healing by Franc at 4:13 AM