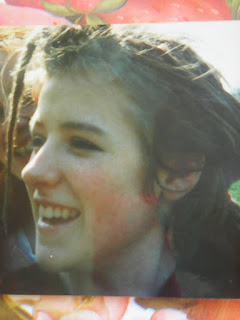 The reason I get to go and live it up with Radiohead whenever they are around is because, in their own words, ‘none of this would have happened if it wasn’t for (me) bringing in that cassette’. I was working in the then Georgetown Studio in 1991 – headhunted for my good speaking voice to get bookings for the studio but I also got to join in as engineering assistant, a little backing vocals, the domestic work as it was residential, I also lived there, provided the general entertainment and maybe broke a few hearts. (This rap was written for me and sung down the phone after JD Starr was in - I only found that he'd recorded it, twenty years later! So I'l just share that mortification for the day that's in it!! Heatwave featuring JD Starr - Mind Blowing Decisions) 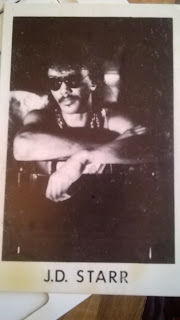 But we go even further back. I was fourteen years old, most of radiohead were a year or two ahead of me at school. Thom Yorke had mentioned how he was much like Pete Murphy of Bauhaus. I had said to myself, furiously; You are no Pete Murphy – who was my absolute hero at the time. Recently, I came across an old diary where I had written: ‘I listened to 13 hours of Bauhaus today’…so always quite a committed soul! Bauhaus -In The Flat Field - Live) 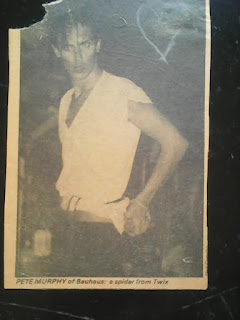 It was with the demos done at the studio then that they got their publishing and record deals, in quick succession with EMI. Such is the power of forgiveness: I knew they would never be Bauhaus but even at 20 I was already big enough to let them be somebody else and concede they had some music worth recording! 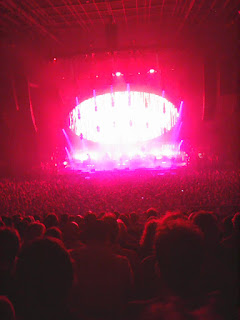 Hanging out this week, I remembered what life felt like before I woke up - to all the hardship in the world and all the things that need be done. I never really did rein in my exuberance but I did become a considerate human being and one repercussion of that is that it has slightly stymied my ability to totally go for it! Which is of course what we’re supposed to be doing with our lives. I thought it was funny when a lodger here at Harmony Hall, years ago, said he wouldn’t pat the horse. When I asked him why, he said he didn’t know whether the horse wanted to be patted. Good reason! And actually this is slightly the road I’ve taken too. 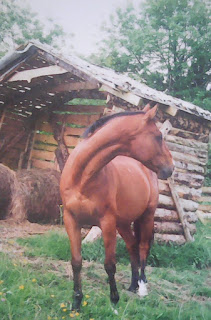 But Radiohead, on the other hand are definitely going for it. What a light show. What a lot of great albums. I had forgotten that Kid A was my sound track for several through-the-night roadtrips. I couldn’t believe that the last thing I saw before leaving Harmony Hall was a green plastic watering can and the last song they played started with the same words. Radiohead - Fake Plastic Trees 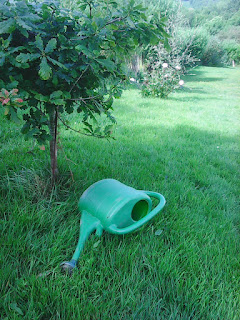 Outside the venue there were a couple of people saying Radiohead should boycott Israel because of their treatment of the Palestinians… That could get tricky, I thought, because although their sadism is prolonged and extreme, if we’re going to talk oppressive countries, they shouldn’t really play the US either, or even here any more, or the UK, for that matter. And then they wouldn’t be able to go home and see their families! 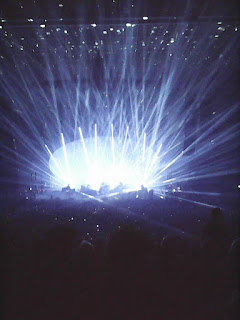 I am sustained for another couple of years having seen them and do you know what made me most happy? To hear that Thom Yorke’s vegan. What a bunch of brilliant sound people, remaining totally sound on the great long adventure of life.

Rosemarie: What a story!! You karma goes with you xx


Gina: Never heard of them but sounds like it was a fun time
Mary Sue: I always love hearing the story of how you helped them get their first record. I'm so grateful you took me along to see them during their Kid A show. Riding the 'friends and family' bus back to the hotel and then hanging out with Radiohead the rest of the evening was absolutely AMAZING! They were such nice guys!! Philip and I had a nice long chat about Minneapolis

Eilis: Fantastic Story
Mike Ryan: Not just a great story but insightful ... re .... Radiohead not playing almost anywhere because almost all countries are oppressive ... some more than others .... and as to whether the horse wanted to be patted ... brilliant ....

😂)lovely words. Frances, bet you had an amazing time

😁much love my dear

Yvonne: Hi Frances im very impressed with your early years association with this band, I have always thought Thom Yorke to be a bit of a genious, I must utube Bauhaus now cos I never heard of them.

Canice: Its great to hear a real life story from a real life experience .if you let go and do exactly as you want its not always the best way for everybody .my friend jefferson holt managed rem from their formative years right through to not so long ago he alw..

Penny: Well I never knew that Frances! I too have a few Radiohead diary entries from school, one day, when I write my memoirs...

Tara: Franc, this has to be one of the most enjoyable posts I have read on Facebook... As you know I am Radiohead's number one fan and thanks to you I was able to tell them in person after the gig in the Point Depot at the 'After' after party in the Morrison...

Rachel: Hope you don't mind me ear wigging your post. So interesting! Just enjoyed Radiohead at Glastonbury on tv in the safety of my own home