Not many people offer their body to science before they die but I've decided that an urgent study on the effects of wifi is called for. To have something and someone to compare 1) the average saturated person and urban centre with or 2) rural community with 5G masts every hundred metres, with trees cut down to give them clear projection, I am offering Harmony Hall and I to be the control group 3) No phones/wifi/electro magnetic frequencies/TV/computer in the the house for a year. I only used the word 'volunteering' loosely as one of these days I need to get paid for the vast amount of research, reports and writing I do!
"I am very interested in volunteering as a wifi-free sample. In terms of studies on the effects of wireless frequencies on human health and wildlife, it has come to my attention that it has proved difficult to find any control group, as the use of mobile phones and constant internet connectivity is so widespread now.
I live in a bio-architecture house that provides a coherent space, without internet connection, television or other EMF interference. I have been able to create a fractal environment, due to energy tools (dowsing, meditation and musicianship) and creative practices and other natural activities, allowed for by time not spent on line.
I have provided a B&B retreat to many programme developers who have confirmed, without exception, that companies are seeking only faster and smaller devices and they have never been asked to design or even explore increased safety features, or reduce their emission of radiation etc.
I would be glad to participate in a comparable study of human potential or human health or preferably both, short or long term. My academic background is a First Class degree in Philosophy from QUB and I've worked as an academic writing tutor for many industry experts returning to study for their Masters.
Would you be able to forward my message to whoever is in charge of health research at Connect or let me know if it is another university department that is working on specifically responsible technology.
Many thanks, "
...I wonder what response I will get! I'll let you know! 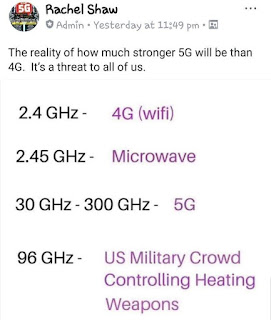 
So! Just saying, let's do one before it's rolled out in Ireland. Maybe we deserve everything we get for blindly being online so much but it might be the final straw for the birds and the bees- literally as pollinators of our food systems and metaphorically -in terms of our reproductive capacity!
Posted by Healing by Franc at 7:13 PM