It strikes me that, at the moment, every act of activism is a basic statement of something obvious: Nothing radical, nothing extreme and literally every member of the public and most politicians agree. Consider the climate marches and animal advocates showing up at exploitative venues.
In a year of an upcoming general election, these would be easy points for government. Not only should activists be protected from the law and the industries that use the law against them (as is happening now with the Greyhound Stadium) but the government could easily agree to stopping the 60 million public money to the greyhound industry and publicly divert it to a sustainable project with equally high emotive power for voters. Sure, if the government doesn't want to leave the various parts of the industry stranded, they can, instead, ban greyhound racing itself but invite Shelbourne Stadium and the other grant recipients to put in proposals for repurposing their buildings, lands, tracks. There must be one imaginative, problem-solving head at each facility - or they wouldn't be able to fill in the forms for that amount of public money. Just insist they come up with new plans that don't exploit the animals and do serve the environment. Everybody's happy.

I have since read that is exactly what is happening for four closing race tracks. Tracks closing and sanctuaries in their place 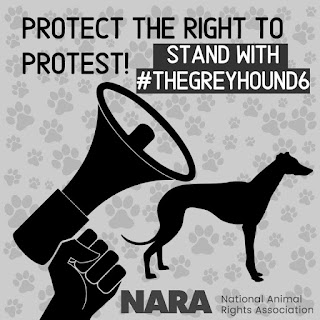 But not for the Shelbourne Stadium sadly...and the activists, the 'Greyhound 6' as they are coming to be known, who are bearing witness to the cruelty there.

Update on their case:
It’s now January and as many of our supporters are aware, Shelbourne Park Greyhound Stadium have taken a High Court injunction against activists - ‘The Greyhound 6’.

This injunction, which was granted on an ‘ex parte’ basis on 29th November 2019, includes a 50 metre “exclusion zone” at protests outside Shelbourne Park Greyhound Stadium indefinitely.

The Greyhound 6 had their first court appearance 18th December 2019, but it reached no conclusion. They will all be returning to the High Court on the 28th January 2020 for what is set to be - at the very least - a 2 day hearing to defend their constitutional right to protest.

All 6 have wonderful legal representation, and are confident that justice will prevail. In the meantime, they are asking for your support for the campaign to ban greyhound racing in Ireland, and would also appreciate solidarity in court on the 28th January 2020.

We will post further information in due course. Please share this around and tag your friends. The Greyhound 6 will need support far and wide.

For the animals,
National Animal Rights Association
Posted by Healing by Franc at 1:04 PM