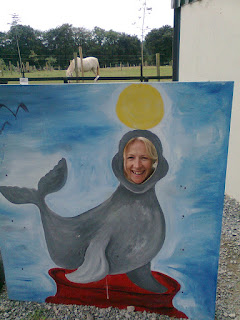 Do you really want to go bludgeoning seals and seal cubs to death like they do in Canada – a blood bath? Unnecessary, cruel and not one person outside your Ballina councillors and whatever incentives they've been offered, who would say yes, go ahead.

Do you really want to authorize a cull of seals as they have been identified as responsible for the shortage of salmon in the River Moy?! Without checking water quality and pollution from the CPAC, the whiskey distillery and the multitude of other polluters causing problems for wild life up and down the river and run off from agricultural chemicals and slurry?  I hope to God, you have poured over water reports for the whole area in question - that is the whole journey salmon cover - not just where they're not showing up for fishermen anymore?

Do you really want to kill seals without looking at the marathon journey salmon make and the other obstacles they may have faced before even making their way back up the river? Especially, how far from the estuary were the European factory trawlers allowed to fish? They have been up and down the Irish shores catching 15,000 tonnes but only allowed to land 12,000 so  throwing back the smaller fish, already dead. The young salmon and all the other young fish are missing, presumed dead. There are dead zones with no fish all around our coast.

And what about Shell and the other sonic blasting to map the ocean floor for fossil fuels, that disorientates the sea life? Maybe the salmon can’t even find their old route back up the river any more.

We’ve nearly lost the Irish hare and now you want to wipe out the seals, when they’re tied in to our selki heritage. Go home tonight to your families and watch The Song of The Sea, a highly acclaimed Kilkenny film. Then ask your kids if they want you to authorize a killing of seals.

What sort of people in this day and age of biodiversity loss and horrendous climate challenges, exploitation of land, sea, soil and animals at everyone’s expense really believe that the seals are to blame for the disappearance of fish in the river?

If you don’t really believe it, I’m telling you, you don’t want that violence on your conscience.

Would you begrudge the seals a few fish? Are the remaining fish ours rather than theirs? It is a question worth asking yourselves where you stand. Personally, I haven't eaten a fish in twenty years as I see how they suffer in their suffocation, out of water.

Have you ever seen a seal cull?

Even five years ago, a Kerry scallop festival had to import scallop from Donegal. This is not a natural predators problem. People, as usual, are destroying their habitat.

Consider who does want them killed and why?

And who do the council members think are going to do the shooting and get rid of the bodies? The ACS? The animal collection service?  The ACS aren’t even registered in Ireland, they are registered in Latvia where the biggest animal body parts factory is. So you give them the contract to kill (the slowest moving probably of all the coastal visitors) and then dispose of the bodies. And what will they do? Sell them back to us in fertilizer and other feed stuffs.

This is a grotesque proposition, completely against the public narrative and wishes which are for more protections for wildlife and nature rather than less.

Have you not heard there’s an election coming up? Who are you thinking of inviting to the deep sea port? Chemical tankers? Those factory ships? We don't want industrial scale infrastructure in the sea, think conservation and nothing else. This is serious. It can only be serving a very select few voters who want the salmon themselves or someone wants to clear the bay before the seals themselves start dying and everyone realises you've let yet another stretch of coast go to the highest bidder/exploiter. I thought that catching salmon in rivers was illegal anyway.

So, don’t do it! Think about the bigger picture for a minute. If there’s no salmon, there’s a situation unfolding that you as councillors need to look into. We are facing a global and national emergency and I ask you, on behalf of all the normal, sane, kind, human beings which is everyone apart from you and your advisors, to leave the poor God forsaken seals alone.
Oh yes, and then you discover that Michelle Mulherin is a Fine Gael Senator, also from the Ballina constituency. These things must all be linked; party in power but hopefully not for long, new big money investment of 10 million for Killala Bay but first let's kill all the seals in Killala Bay. So bloody disturbing this politics and is no-one thinking about the future? About preserving life? Any of those old nice things that were once important?
Posted by Healing by Franc at 5:41 PM