Tackling Housing, Factory Farming and The Environment 'People Before Profit-style'!

I have attended two really brilliant events in the last fortnight, both organized by the political party, People Before Profit. The first was in Waterford where I heard  a talk on art and politics. Suffice to say, ideas of radical art ‘to represent the struggle of minorities’ caught my attention and socially engaged art. But then the systematic degradation of fine art in colleges and promotion of drawing and design for computer games and other graphics that will lead to jobs in IT and other technical  and marketing industries. His name was Professor John Molyneux if people want to look him up and he’s also just published a very interesting book for the PBP, Environmental Policy - a radical alternative. Which God knows, we need. When I talked to him afterwards, I said I paint because I want to raise empathy towards animals and share some of the joy, energy and colour of their antics. He was very interested and gave me a short history of the commodification of animals in art. At first they were depicted in an honorary role in cave paintings, with an element of sacred and ceremony to the hunt and relationship. Then Rembrandt did two very graphic masterpieces of a slaughtered and hung ox. Then there was that ….(beep) who cut the cow and calf in half and preserved them in formaldehyde. At which point, any sense of the value of a life was long gone. Until my paintings came along anyway!

That was followed by a very interesting debate on racism in Ireland and how best to deal with it. And then a debate on the repeal of the 8th amendment. And then a talk on how the climate is doing. I put that all as lightly as possible although, there are impasses at every turn.

Yesterday, though, I joined the others at a leafleting session on the housing crisis. The leaflet read that there was a big march on 7th April in Dublin about it and there was also a petition. It was mentioned, although, it hadn’t occurred to me, that the point of the stall was to encourage people to join a collective movement rather than just fight individual battles as they came to them. I thought, yes! That is so needed because once your own housing is at risk, you are completely powerless to take a stand. 1) Because you’re vulnerable and in crisis and trying to make an emergency survival plan 2) because the people you need to show up as acting unfairly are the same people you still hope will take pity on you and let you stay in your accommodation.  3) There’s strength in numbers and the government might have to listen.

I got talking properly to about 12 people over the hour. They all came from the side steps of the Town Hall, so would not have seen the posters yet and so none of them knew I was going to talk to them about the housing crisis. And Yet, 10 of the 12 had LOST their houses or were in the process of losing them. Four separate families had paid their humungus mortgages for upwards of a decade before being evicted when their mortgages soared 200 to 400 a month. Others were in rented accommodation and had only heard at the last minute that they were to leave, as their landlord had not been able to keep up the payments.

I had 2 seconds to say say something so I just said, “we’re looking for names for a petition, asking the government to stop allowing the huge hikes in rents and all the repossessions of homes.”

It turned out that that was enough. It was close to everyone’s heart. I had the dogs with me so anyone who wasn’t interested in housing, stopped to talk to them. And anyone who wasn’t interested in animals, stopped to hear the musicians who had set up shop next to us. Can I just say, they were fantastic. We’re talking dance beat/rap under and over the Tracey Chapman Fast Car melody. Another guy, singing and playing guitar, sometimes harmonizing between them. The sun really shone on us in every way. They are not yet a band so I can’t tell you who they were. In fact they couldn’t tell me so that’s very serious for their careers but still, maybe when they’re ready they will!! 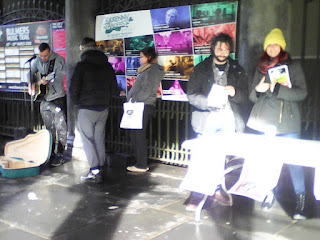 So, I reckon, join People Before Profit. It just seems to be great, thoughtful and intelligent people doing whatever needs to be done and having a good time at the same time.

In addition, they are behind the motion (?? I think this is the right term!) to end factory farming in Ireland and are putting it to the government. I have never heard about harmlessness being so central a vision. Let’s express ourselves through art, let’s make social housing available, let’s not confine every other living thing to exploit it and let’s be brave and make the changes we need to make to save the environment. It’s not gone yet but there are plenty of people in drinking water trouble even this week, here in Ireland. So, let’s not make it a ‘Don’t know what you’ve got until it’s gone and I found out a little too late’ Chicago song moment!

And I also suspect that the PBP won’t be vouching for Ireland to ditch its neutrality and join the blood thirst arms race. I haven’t asked yet but I’m pretty sure they’ve got some better outcomes in mind for Ireland.

Don’t worry if you have a different political leaning though, I’m just saying let’s have these conversations about what matters and help our communities out to stop the homelessness situation.

Interestingly, I left the leafleting and raced straight to the newsagent in Paulstown to buy the times. I was quite convinced that they would print the great article I wrote about empathy and art and mention my exhibition in Bray, opening on Friday. I searched every page and there was no sign! However there was this front page headline which made me super glad, I’d spent lunchtime raising the situation: 8000 homes repossessed since crash. The banks get to keep all the previously paid money, get the asset of the house back and sell it again….AND to add insult to injury …the original mortgage payers still must repay their debt. It is not enough that they are now homeless, nothing to show for the thousands they’ve already paid, they’ve given the house back and they must now find rent as well. 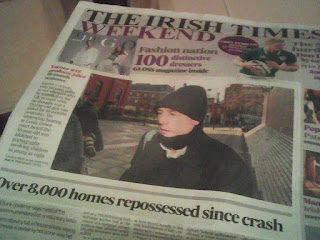 Wow, I think that should be hard to justify. Has anyone asked the banks how they justify it? Maybe I missed something, maybe it’s all fair in love and war. But this does not sound like love or war…except maybe a war of attrition against the people of Ireland. It is time to take the power  back, surely…as Rage Against The Machine so rightly suggest!

Posted by Healing by Franc at 3:29 PM