November's Oregon Vote on Genetically Modified Organisms. To Label or not to label! 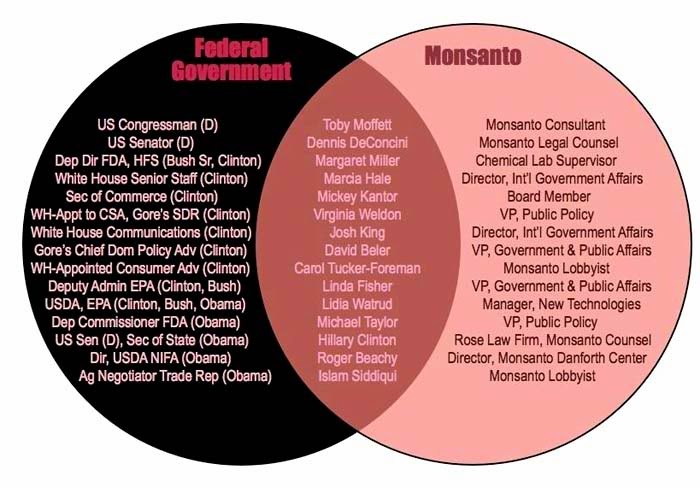 It is a fascinating time to live in America. This diagram shows how many of the government are also being paid by Monsanto, the name behind genetic engineering and chemical agriculture sprays. He is being sued as we speak for one billion dollars by the farmers themselves, as no one will buy their GM crops, mainly banned in Europe! He was sued for 90 million dollars for poisoning a whole town. He is also in court against a collective of 5 million Indian farmers who still live on the 'suicide belt'. It was so named following the despair and suicide of thousands of small farmers who bought Monsanto's GM seeds and were then charged a second and third time for them when the farmers saved some and replanted them the next season.

This November in Oregon, there will be a vote on whether foods must be labelled if they contain Genetically Modified ingredients. The obvious answer is yes, of course they should be labeled. If you think of the hoops producers must jump through to label their food 'organic'! Amazingly, $18 million dollars has been spent already by chemical and big food companies to confuse the voters in Oregon. Coke Cola donated a few million and many, many others just randomly donated vast amounts of money to help stop GMO labeling become part of the legislation. It just goes to show how much they want to keep people in the dark.

If you are in Oregon, I would ask you to definitely vote when it comes up. Also notice what happens! For example, I heard that 52 out of 63 government officials voted against giving a license to a new Monsanto spray that contains Glysophates (found in every breast cancer case) and Agent Orange (a chemical weapon developed for use in Vietnam)…Nonetheless, the license was somehow granted. America is not the only place where corruption is rife. Scottish people voted recently on whether they wanted to be independent of England. Half way through the vote count, the fire alarm was sounded and everyone had to leave. CCTV footage shows that several people were not evacuated and could be clearly seen moving around the hall, adjusting voters' choices.

None the less, we do have choices. For me I would say that the only way to guarantee harmlessness and an easy conscience is to buy vegan and organic food. Also cross reference these names above and make sure you are not voting in anyone compromised by a steady second income from Monsanto!! This goes for other countries too. For example, Ireland has the same minister for agriculture as defense Simon Coveney…whoops, money, chemicals, weapons, food, all in a day's work…that is a lot of conflicts of interest.
Posted by Healing by Franc at 2:42 PM