Letter to the editor of the Independent 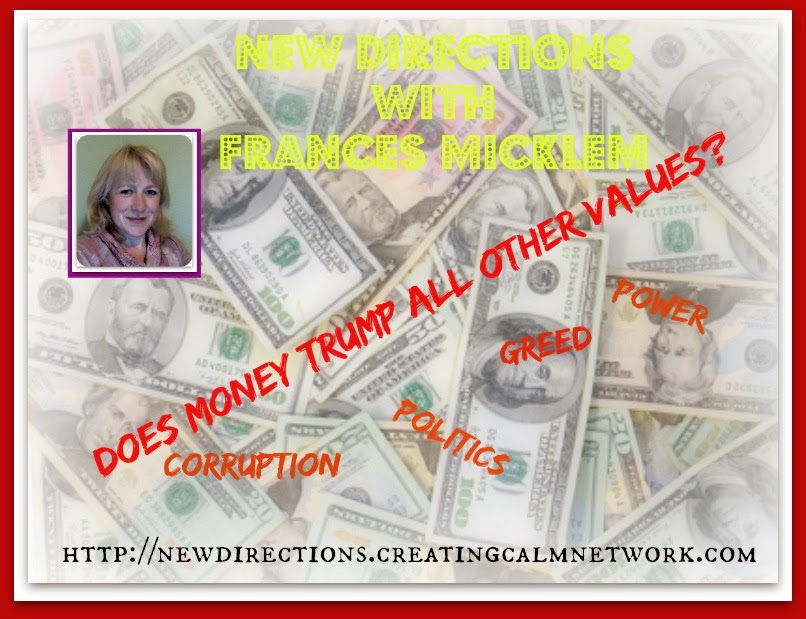 Dear Editor,
Are the courts missing an opportunity? To judge the greatest case of all; Money Vs All Other Human Values
Every person in Ireland is asking for positive change in governing and the courts can make that happen.
I am writing about the recent campaigns in Kilkenny against the Central Access Scheme, Poolbeg and beyond against the giant incinerator and country-wide about the water meters, fracking, pylons, wind farms, the victimization of farmers and separately the proposed exploitation of animals in their farms via the intensification 2020 plan to produce 50% more dairy and 50% more cows, while somehow becoming carbon neutral simultaneously, along with all the other suspect international and 'county development' plans forging ahead, in the face of almost complete public objection.

I keep hearing noncommittal outcomes from very expensive cases, heard after many a long stand on the protest line and many a letter of complaint. The judges keep saying that everything comes down to the workers' right to work and the protesters' right to protest. This is not hearing the case at all. The question should come down to whether the work that is planned is legal and just and whether the objections motivating the protest are valid and uphold able. People want the courts to rule that the work should stop. They want the courts to insist that everyone account for themselves, not hide behind a corporate or political party front.

It is convenient to talk about the cost of protests but money is the only value which the government and legal system seem to consider so far. It is those who are protesting, that have a range of important points to address, that need to be offered the long arm of the law. People who protest are motivated by a great number of important values. Listen to any quick opinions recorded from a protest and you will hear the most willingly offered and coherent arguments. They will include considerations of transparency, democracy, the environment, public money, affects on quality of life, personal impact, future impacts, public health, heritage, community, corruption, inappropriate use of public funds and justice. Then a council is asked for their answers and not one is forthcoming. The bunches of authentic, informed, determined people are clearly the ones to trust and listen to.

Judges could decide if the contamination of our air should be allowed or if the threat of increased traffic is tolerable (Poolbeg have been warned 100 trucks a day from the building stage ad infinitum as vast quantities of rubbish will have to be imported to keep the incinerator going). Perhaps judges could also decide if the council, planning office, building contractor, water, waste, food company in question looks even capable of maintaining a safe standard at any time in the future.

Lets not just turn away from the entrenched difficulties of our society, disillusioned, or even penalized for flagging them up. Let us unite through awareness of the different campaigns each community faces (and give me Garth Brooks in my neighbourhood any day of the week, if that's all the Croke Park community has to deal with) - better than all the toxic invites the councils have welcomed no problem onto our shores. The courts can make sure the institutions fall and companies that are unfit for task go too. Like the 5 million farmers suing Monsanto can we too get rid of the pharmaceutical companies that have zero interest in the well-being of the human race. Just because they are rich should not mean they are left in charge of our agriculture and our medicines. We need people at the top that can say no to half a billion or whatever euro signs flash before their eyes, when they see that the actual cost to life is too great. We have such people with the clarity, independence of thought, vision and staying power attending every rally and I would like to encourage others to share my total respect for everyone that makes the effort to turn out. Come on courts, back us up! Don't treat corporations and councils as individuals with rights. They are entities with no moral values and it is the real people who stand alone, but in unity that need you now!

Posted by Healing by Franc at 3:49 PM