The main component of the 5G network is the millimeter waves. A study by the Centre for Environment and Vocational Studies of Punjab University, researchers observed that after exposure to radiation from a cell tower for just 5-30 minutes, the eggs of sparrows were disfigured.

The disfiguration of birds exposed for such a short amount of time to these frequencies is significant considering that the new 5G network will have a much higher density of base stations (small cells) - every 250 metres.and therefore mutations that could easily threaten a whole population’s survival.

A study done in Spain showed breeding, nesting, and roosting were negatively affected by microwave radiation emitted by a cell tower. 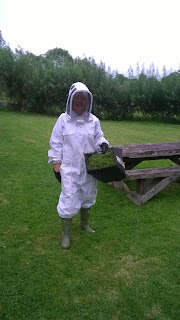 Bees are an incredibly important part of the earth’s ecosystem. Around one-third of the food produced today is dependent on bees for pollination. Warnke found that beehives exposed for just ten minutes to 900MHz waves fell victim to colony collapse disorder. Colony collapse disorder is when many of the bees living in the hive abandon the hive leaving the queen, the eggs, and a few worker bees. The worker bees exposed to this radiation also had worsened navigational skills, causing them to stop returning to their original hive after about ten days.

Can I ask that planning permission for the mast they sneaked up here be revoked? I just spotted the first time, I've been looking for it for 8 months. There will be others I'm sure now I know what I'm looking for. How are we supposed to protect biodiversity and grow food if this detrimental new technology is allowed? Anyway, anyone? Do we have a case to stop it? Has anyone tried?

(Comment: 5G is the microwave frequency and is commonplace in Shenzen etc plus facial recognition, drone surveillance and social credit and identity and yet no western government questions it, have all of them been compromised ? )

I am not sure how they all got compromised. I think in Ireland, Eamon Ryan was blinded by being given that huge technology budget to manage but I'm apalled that the greens didn't push for one independent study (or look at someone else's). What a hideous legacy.

So I did four things, all quite telling.

1) I appealed to TDs early last year with everything I had and I got one reply. One sentence: WHO says it's safe. Bill Gates of Microsoft Technology, is the WHO's biggest funder.

2) The public tender to run the National Biodiversity Data Centre came up this time last year, for €450,00. I went for it with business partners, including a national training school, prepared to roll out citizen science training to engage every college, community and farm in monitoring biodiversity before and after the 5G infrastructure went in. We also committed to monitoring the protected areas which Ireland is being fined for (every day) since we failed to protect them since 1992 when they were designated. We also committed to assembling a forum of doctoral researchers to interrogate the data from their various disciplines, so that the centre could support community actions to protect nature against big industry. We also proposed to create an information management system so that green deal money could be drawn down from the EU on the basis of positive climate action results evidenced by the data centre. Suffice to say the 'infomatics' guy got it who has been keeping it tipping along the last four years, absolutely no use to anyone.

4) Every time I raise a valid question about EMF or 5G or anything else, I am told to make myself a tinfoil hat to protect myself and I might well go that way! But to roll out blatantly damaging technology like that is criminal I think and I'm having a hard time forgiving them.

5) I saved the worst news until last. Valentia has 350 hubs on it. I couldn't find one of them. When I read about the different companies who rolled out the rural broadband there last year, I can't work out if they are saying it is fibre-less broadband or they are using fibre. If they are not, that is pure wifi of the 5G kind. I also can't work out if it is still beaming away, even when few people actually have devices/routers that can receive 5G. Kind of what strength it is and impact on biodiversity and birds and people even before it's used? Do anyone know?

Posted by Healing by Franc at 3:01 AM