Before we accept increased Garda powers and fines as ‘necessary’, please consider that only three demographics of people are moving around despite the restrictions. 1) The very rich and 2) their enslaved workers travel. Both go wherever they will or daily grind, respectively, as before. Both groups 1 & 2 move around the country and travel on air and ferry with impunity – They may be a Mr Quealy to his pig slaughterhouse or a Joe Blogs to fill shelves in a supermarket. Equally granted safe passage are terrified student nurses to volunteer and equally demoralised more experienced doctors and nurses to work on  Covid wards. Oh yes, and farmers – although no one has explained why that is but I carry my Farmer’s Identification with me so that I can go somewhere if I need to. Which brings me to the third group the gardai are stopping. 3) the very desperate with no other choice.

There is no fourth group – some sort of wild minority of people who do not believe in the pandemic, who do not respect the law, who are not trying to protect the lives of their families, the lives of frontline workers and protect against the spread of the virus. Think about it, there is no one getting up in the morning thinking Sod it, I’m going out. The only people who are going to get fined are the people who HAVE TO go somewhere to do something or at worst are just getting out of their domestic situations and have no intention of leaving their cars.

It was only recently, when I saw this video, that I realized how tragically desperate people already are. Around the world, people like us were all living ‘hand to mouth’, ‘month to month’ even before the pandemic. Within one month of lock downs, people were defaulting on their house payments, be they mortgage or rents or business leases. Small businesses made up over 90% of Irish employment and Income tax for the country for that matter. Nonetheless, straight away we were all shut down, leaving only the corporations and banks to monopolize all industries including food and health. And most importantly a monopoly on our countries’ economic policy – eg tax breaks-arama to increase their profits and also commanding a cut of the recovery monies too. And still the Department of Finance won't give us our public banks - such sadists and gimps to the private bankers.

What I saw on the video were protests happening all over the world, since last summer, Ireland included and none of them reported in the national media in Ireland or the UK. Their cry was unanimous: Don’t shut down livelihoods and everyone’s ability to survive on the strength of faulty PCR testing, heralded as a golden standard but actually 30% false positives. And inherently flawed calculation of all deaths, as caused by Covid.

The policing response in each area has also been unanimous: Heavy handed, violent, armed, dressed in riot protective gear arriving to ‘clear’ the initially peaceful demonstrations. After 6 weeks of protests in Spain, the police took off their helmets and joined the people, marching in solidarity. A metropolitan policeman (UK) was interviewed saying that just because your line of command tells you to go beyond your remit to keep the peace and use force and make arrests it doesn’t give officers a right or reason to do so. He cited the Nuremburg trials where Nazi officers said they were told to commit atrocities and that was not sufficient for them to be freed of accountability.

I write this down as governments, media and tech companies are spreading a narrative devoid of logic and conscience. I want to share another understanding of what is happening with the intention of people resisting the punitive divisions and outrage people are being encouraged to aim at each other. No one deserves a fine because if we think for a moment, or ask anyone who is driving, why they are driving, they will give a perfectly valid reason and will be taking every possible care to be stay safe and keep others safe.

There is one caveat to No Lives Matter in Ireland. If you are visible and have public support, you matter. But no one is visible now and no one has public support or even community support. We are all in our unnaturally separate experiences and we could all die for all they care. They are keeping an eye though, but be sure it is not for the ‘public good’.

How New Racist Feeling is Being Generated every day.

There is a lot of coverage about Black Lives Matter and how Trump promoted racism but today I put two and two together and realized that for the Irish and UK government, no lives matter.  I think that’s a lot more serious and that Trump may be a caricature and distraction. In the UK today I heard that there is fear of the vaccine.  One headline says ‘there’s no pork or meat in the vaccine but fears persist’. Well that could be the fear of Bell’s Palsy, the paralysis, the loss of use of limbs and strength, the fevers, the chills and the allergic reactions including death. A lot of the people who are not taking up the vaccine are Black, Asian and Minority Ethnic (BAME). 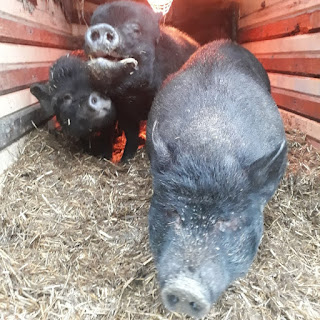 Some of my muses for social change; Becky, Legend and Angel

Instead of sticking to the plan that the country needs a 75% uptake and resting assured that 75% want it and are waiting for their turn, a minister today said that there should be a concerted push to get the vaccine into the BAME demographic. They don’t want it. So why not find your 75% with the others? Answer? Well, they’ve spread another story too. That many of our nurses are from those backgrounds and nobody wants to be treated by someone who might get Covid! They have managed to create a Covid fear and further community and race division around the uptake of the vaccine. Meanwhile 23 die in Norway after the Pfizer one and thousands react in California so they had to ‘pause’ the roll out. Pfizer say ‘they are not alarmed by the numbers.’

Ireland is no better and here they use technology companies to spread loathing. When you need help or a refund or to deal with any of their horrendous service from your telecommunications company, you are met with waiting on hold, there being no email contact, to not helping, to not being able to authorize a refund or a cancellation or resolution of any sort…that is their first line of defence: the Indian customer care centres. When you have nearly decided to top yourself and/or get out of your contract once and for all, you are at last transferred to another centre, where they are all Irish, sound, relaxed, capable, apologetic and able to resolve the problem as they speak to you. This is intentional. You come away (even I came away) beyond irritated with the foreign correspondence and relieved at the local solution.

What has been allowed while we were restricted

And then they let you down with your connection repeatedly just before the text comes through saying that 5G is available in your area. Your local TD says that WHO says the technology is ‘safe’ and that no studies will be one in Ireland on people, biodiversity or environment and no peer reviewed studies from elsewhere will be looked at either. I rang my phone provider 6 months ago to ask about 5G. She said, 'oh yes, all the companies have been told to roll it out when they’re ready….no regulation whatsoever…. And they were hoping it was going to be 2020 but because of the restrictions instead it would be 2021'.

As it was, they did get it in by October 2020. Think about that too, if you will: The new technology needs new infrastructure that no one witnessed going in, although we all saw a huge amount of trees being cut down in the summer apropos of nothing. This is the sight line that 5G masts need, So much has happened while we’ve been locked in our houses, it really is sinister and worthy of your time and research – while you can still find out more on the internet.

I share this video while I can. But probably even more importantly, I ask you to support a public banking movement in Ireland, a bank able to provide credit for the rebuilding of our indigenous industries (and I’m not talking mad eclectic trad, I’m talking basics like fertilizing the land with seawater and seaweed – (not mechanically harvested seaweed either…but that’s for another day) and food security.

A good summary of what is going on behind the amateur dramatic scenes of Trump and the fear-mongering tragedy of the virus and lockdowns!

Posted by Healing by Franc at 9:43 AM