Fighting for Irish Health Food Shops, all the UK ones are gone 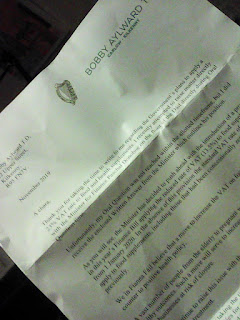 Probably everyone else wrote too, but this is what I wrote to try and stop the proposal to add VAT on natural food supplements. I got a good response from Bobby Aylward Fianna Fail TD, God bless him, who did try to fight the corner of the health food shops. He enclosed the formal response from the minister for finance. As usual. I uncovered an outrage. He said they were imposing the VAT because the 'IHTA had complained' about there being zero rating. 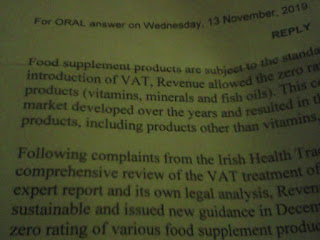 I looked them up to see if they were an organization full of pharmaceutical board members. No! They are the support network for health food shops...brandishing the petition to stop the VAT!!!! Wow!

So I wrote to them just now:
I have just received a letter from the Dail stating that it was the IHTA that complained about the zero rating and are the cause of the newly imposed VAT. Now I look at your IHTA website and I see that you describe all your services as 'value-added' ...can I just ask, if you really want to be responsible for the closure of all the health food shops? I notice as well that you'll still have Boots - a shop that carries not one item with a cruelty free symbol on it, let alone a natural supplement.
Was there implicit or explicit pressure from the Pharmaceutical companies to tax these essential supplements? I ask, because my letter also said that infant formula was not going to be taxed and some official 'oral medicines'. That would protect the zero tax status of the likes of Nestle and the companies monopolising medicines and yet penalise every single company trying to produce something that boosts the human, infant or not, immune system?!

I would dearly love to know that this is not the case and that it wasn't you who complained and asked for Revenue to review the zero rate VAT. I bet all your members would love to know too. If, in fact, you did not complain and ask for your members to have VAT imposed, I could then write back to the government about how they lied in writing...again. "

It is bad news when the IHTA is shafting the Health Food Industry like the IFA are shafting the farmers. Is no one on anyone's side anymore? The government and friends must want us dead or at very least sick and in dire financial straits. A few might argue that most politicians don't know anything about the issue but somebody has an unhealthy agenda.

The good news is that after I signed the petition in the Good Earth health food shop, in Kilkenny, earlier in the year, I came home and wrote the following. I wrote it as part of a 3 point letter to Kilkenny council about three things that needed to happen in response to their own declaration of a climate change and biodiversity loss emergency. I asked the council to collectively contest the VAT idea and save Kilkenny's health shops. As I didn't write to Bobby Aylward himself, I think the council must have done this to get it heard in Dublin where the decisions are being made, at the Dail question time. So, I appreciate that. That's really good!Thanks KK council!

My first point was stop spraying at once and poisoning land and food. My third was tell county vet inspectors to look for more efforts for biodiversity, five freedoms for animals and sustainability. But this VAT was my second point!!!! As follows:

"Please stop the new VAT of 23% they are threatening to put on Health Food Supplements on November 1st. In case some don’t know, health food shops are the only places to supply natural and chemical-free food and plant extracts to support the immune system. We are talking about the trace minerals and vitamins that our lifestyles and food no longer provide and also boosts for people who are vulnerable or under physical pressure, like in training or during pregnancy.

Instead of supporting health food shops, their suppliers and customers, the government is recommending that people over 65 or pregnant get a flu vaccine. (Several state-sponsored adverts on national radio saying we should all get one!) Our complex and brilliant immune systems can fight any bacteria, virus or fungal infection, if people are given affordable access to health supplements and education on their diets – to reduce sugar, as it blocks the absorption of vitamin C for example.

Please stop this VAT, which will make health food shops themselves, as well as the production of the special products they stock, not viable, unsustainable, unprofitable, intolerable and consequently shut them all down and compromise public health still further.

Anyway, I'll report back if I find out more and eventually scan in the letter and 'Written Answer' from the finance minister, if I can work out how to do it!

In the meantime, there was a partial success. Instead of 23%, a 13% VAT has been decided.
Posted by Healing by Franc at 1:13 PM