Fracking and Deep Water Drilling subtly different but both quite a long way from protecting our heritage and environment. 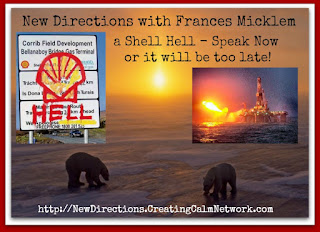 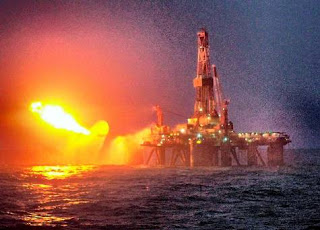 I don't know if everyone remembers Shell are drilling away in Mayo? Two weeks ago, Vermillion (whoever they are) announced 17 million profits from the first three months of drilling and simultaneously the peaceful demonstrators' spokesperson, Maura Harrington, was put in prison for a 300 euro fine. She is out now but don't forget that Shell will never pay tax and Ireland is not in line for any of the gas or financial winnings of that site but directly in line with all the environmental consequences. They speculate 7 billion dollars (they don't even bother to calculate it in euro!) will be made in its 20 year gas field life…oh yes and Carrowmore Lake, the local water source, is long contaminated by their fracking fluid. This is all happening again now in Antrim, with full police presence guarding their interests as well. Meanwhile down near Valentia, they are saying that the visiting-the-Skelligs season can definitely not be extended by a week or two, to accommodate more visitors because of Star Wars. So you can lay waste to our fresh water, our justice system, our environment and human rights but definitely don't let those holiday makers off for an hour with their cameras, they could do serious damage…could they? Probably not much in comparison.

How about a letter of concern to the governing bodies on Antrim's behalf. Their fracking only started on the 16th May…I would say write to the planning office but hey, the fracking in Antrim didn't go through a public participation or planning process!

So the only question that remains is have you all lost your minds or have you reason to believe that you have some other planet to go to when you’ve destroyed this one?
Fracking wells within 500 metres of a major water supply?
No planning application process or public participation?
Police guarding the private financial interests from the presence of concerned citizens?
Will the company pay for the millions of tonnes of fresh water it uses?
Where will the toxic wastewater be stored?
Why are these under ground tanks less likely to slip and start an earthquake than in other countries?
The very same happened down in Mayo with Shell and that lake, their main water supply is contaminated.
Always remember we all have the one life, use it up wisely. Don’t let this go ahead unchecked on your watch.

Posted by Healing by Franc at 5:57 AM