Election Message: What Parents Should Remember Before They Vote 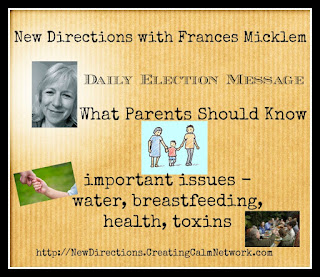 As we hit 2016 and the 1916 anniversary, we are reminded of the fights that have been fought for independence. Back then there weren't the choices of governance. This month we have our own General Election, we can choose what we want.

This is not a moment for complacency, when we've been given a choice. Do we want to sign and agree to five more years of evictions, poisoned food, health care cuts and privatization…And perks, breaks and privatel outs for multi million euro businesses and individuals? The answer has got to be know….and No!

I've also been thinking about the past. My Dad was evacuated during the war, 7 year's old and responsible, on the boat for two younger brothers. But it is his father, my Grandfather, who I am guided by right now. He broadcast for the BBC every single day of that war, in German, to the German People to let them know what was happening in concentration camps and in their country's name.

We, in Ireland are being kept in the dark in the same way. In food, natural resources, energy, war vs our neutrality. Most importantly and currently, we need to refuse, reject and vote against the TTP (Transatlantic Trade Partnership).

We can actually foresee, if we care to look, what sort of place we are leaving for the next generation. The podcast above is a few things it'd be great to consider before you vote this month. Make sure you make your vote independent, democratic, green and only candidates that put people before profit.
Posted by Healing by Franc at 2:17 PM