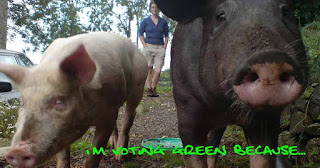 I was shocked and would like to object whole-heartedly to your current contract on e-tenders, looking for someone to build more farrowing crates. Ireland is moving away from intensive farming. I read in your research of 2019 that a large proportion of sows roll over their piglets in a free pen, more than they do in a controlled pen. Without doing any more research, you could conclude that that means the ‘free pens’ are not sufficiently bigger that the previous ‘control pens.’ At least the research confirmed that piglets were healthier if they did survive in a 'FAT system of free pens...although I thought that 'fitness' levels was too strong a word for an animal that is never allowed to move further than one metre.Teagasc Study Findings

This isn't the first time we've been embarrassed and let down by Teagasc. You were, only a few years ago, experimenting with the genetic modification of potatoes, which is illegal in Ireland. To avoid detection, you were employing plant pathologists from abroad, Africa and Honduras who would be glad of the work and unlikely to disclose the details. It came to light as I helped one or two doctors with their English before their interviews with you. I believe Minister Noonan and MEP Grace O'Sullivan had to take the matter to Europe to get Teagasc to stop the GMO work. Please confirm that you did in fact stop the GMO work.

Perhaps it hasn't filtered down yet but farming has a massive role to play in climate action, pandemic minimisation and financially, in the New Green Deal.

I ask you to please revisit your pig management Fetac Level 5 which is so unbelievably popular with 500 participants one year, I noticed, and start teaching them about genuine care, respect and small, high quality, environmentally sensitive farming, commanding high value with local consumers, the stress-reducing benefits of on-farm slaughter. This is, as opposed to how to manage heat-stress in a completely un-natural, inhumane, indoor, over-populated system.

The majority of pigs are confined here and we're the worst in Europe. Although I see that you are most interested in the Chinese system. Like most people, I have seen the 'hog hotels' with piglets going up and down in the lifts and hundreds of thousands of pigs that had to be killed en masse with the swine flu. Even closer to home, up the road there are the AI facilities with twenty thousand pigs each.

I support lots of farmers in the Kilkenny region and they all say that the message from the authorities and government is still to increase animals and yields and no mention of diversifying and natural ways to build soil fertility.

Call me soft-hearted but the national narrative about animal welfare does not define it like Teagasc does; 'to avoid carcass loss'. We're still hoping for the 5 freedoms, which include the chance to display normal behaviours. I am a small pig farmer myself; free range, organic, bedding rather than concrete, fresh air and the pigs have things to do. They are engaged purposefully in rooting, to aerate areas for future crops. Their manure is also gainfully employed for soil improvement.

We don't want these practices on our conscience; tail docking, teeth extraction, testicle-removal, all without painkillers; animals never seeing daylight. The Irish, like everyone, are being encouraged to cut our meat and dairy consumption; to stem the need for antibiotics, to reduce untreated run off from farms or use it for energy generation. We don’t want unwanted dairy calves driving the price of cattle through the floor. They want small suckler herds, local markets meaning less preservatives in food, no debts. The public know that to build our immune systems, we have to stop the use of chemicals in farming, food and animal feeds.

You're supposed to be leading the way and here I see that again public money is going towards things that not only we can do without but Nature cannot manage.

Posted by Healing by Franc at 4:27 AM