Pippa Hackett for the Green Party pointed out:

“Minister Madigan has an abysmal record on wildlife protection, and this decision is a total abuse of power and a reckless act of wildlife vandalism. She is pandering to a minority group of people and amoral backbenchers that support this cruel activity, and it’s risking the increased spread of this fatal disease.

I wrote:
Dear Josepha,
I don't know what pressure you are under or from who but if you don't reinstate that ban on hare netting...hares being the national emblem of Ireland and endangered and horribly kept and tortured in coursing, you are literally licking the *****of the hare coursers.

I have demonstrated outside the championships in Clonmel 4 years in a row. I can safely confirm that that is something you do not want to do. The men are gross, cold, ignorant and indifferent. Or should I say attached to their violent viewing. 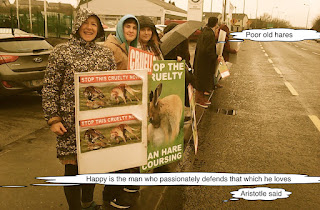 There are a few women who show up too, but they just don't want to be hated. This, I understand. But in your position, where you can make a change for the better and you started the ball rolling.

I ask you to make up whatever pretext you need to protect the hares. Or just keep the threat of imminent extinction going as a reason to keep the ban on netting hares going. They have never done anything to you. To anyone.

Every other country has banned it. 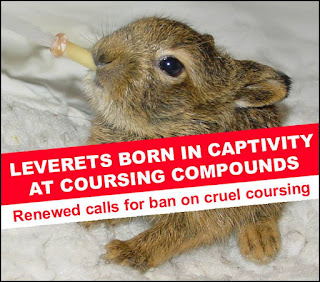 The greyhound cruelty has even at last been highlighted in Ireland. Oh yes and some of the public don't like the hare torture, Is that what you want to mention at the pearly gates? That you didn't care? That you didn't respond to public opinion? That you had every back up?

The RTE have exploded the situation.

You know there's a fatal disease. Why would you let  the ban go now? You have a chance to enforce something that has needed, cried out for and required someone to deal with it for years.

The disease is spread by the empathy-free conditions of the cages the lads put them in. And yes it is only men. I would love to hear if there are any girls out there 'lamping': Petrifying and killing rabbits and hares.. I really doubt it.

Posted by Healing by Franc at 2:46 PM