What makes you think that a human life is more important than a cow's life? 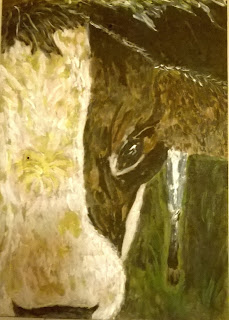 Actually people do not believe that human life is more important than a cow's life. They don't think any life is important. Cows' lives are in fact coveted more because they lead to profit. If human life were genuinely valued, the grain grown - sufficient to feed 13 billion people - would be made available to the 7 billion of us there are. Instead, one billion starve while the majority of grain is fed to farm animals. It is widely seen at the moment that we can't seem to really respect any other living beings. Animals have a life of their own. It is so inappropriate to kill them when we want to exploit them and use their bodies as a sale-able product. The fear and pain of the meat and dairy industry is shocking and is considered normal.

I had a dream last night that I was running a horse pound. I was the manager but the old style pushing, shoving and violence kept kicking off in a stable, between workers and a horse got beaten to death. Killing is so routine now that it is considered normal and licensed by the Department of Agriculture. In the Irish Field I read that the same department oversee B&F Meats who were the main slaughterhouse that managed to get horse meat into the food chain here. They have got their license back and now they are called Emerald Isle Foods…no improvement in practice, no change in premises or management just a renewed license and a much more appealing name.