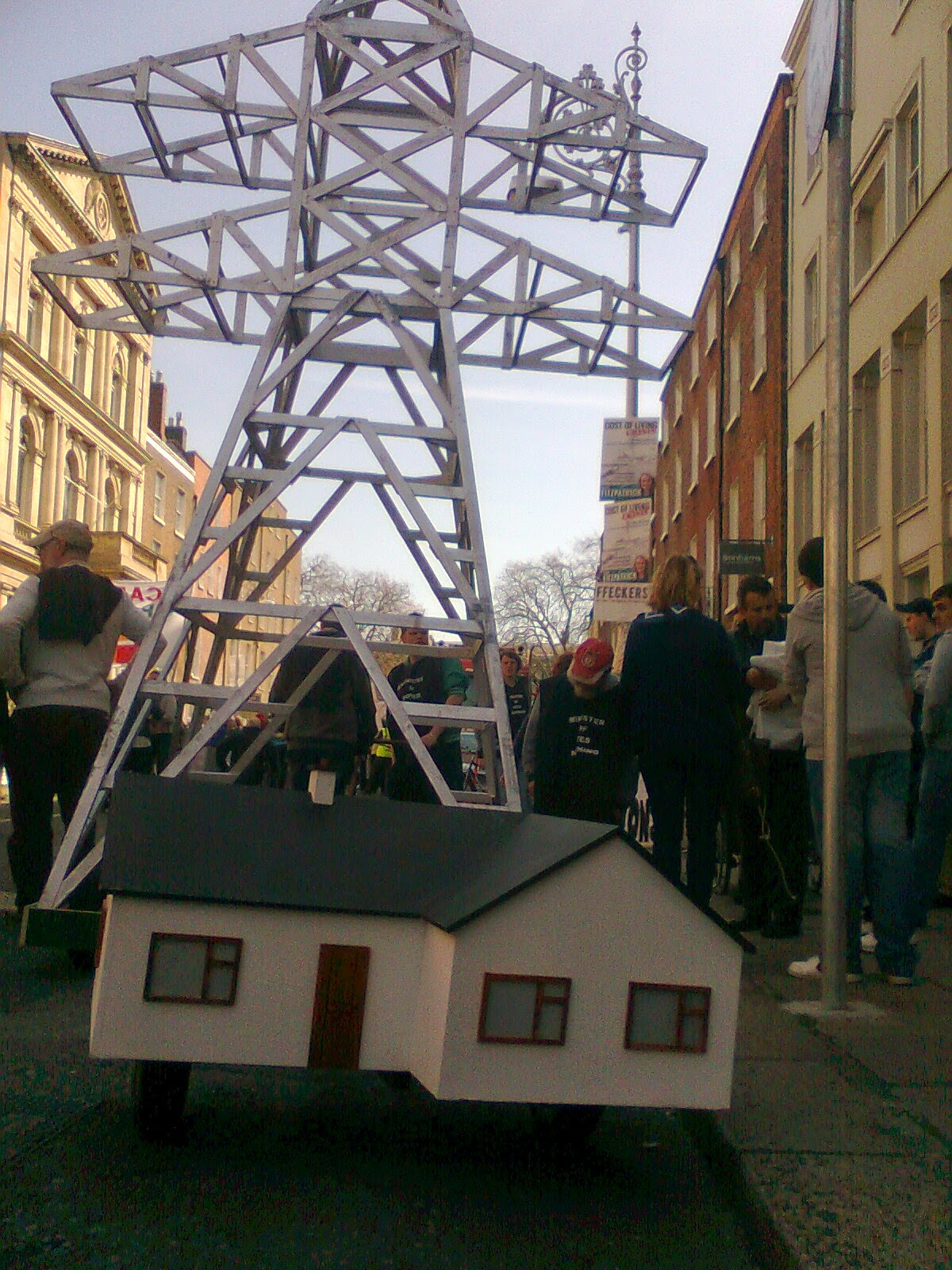 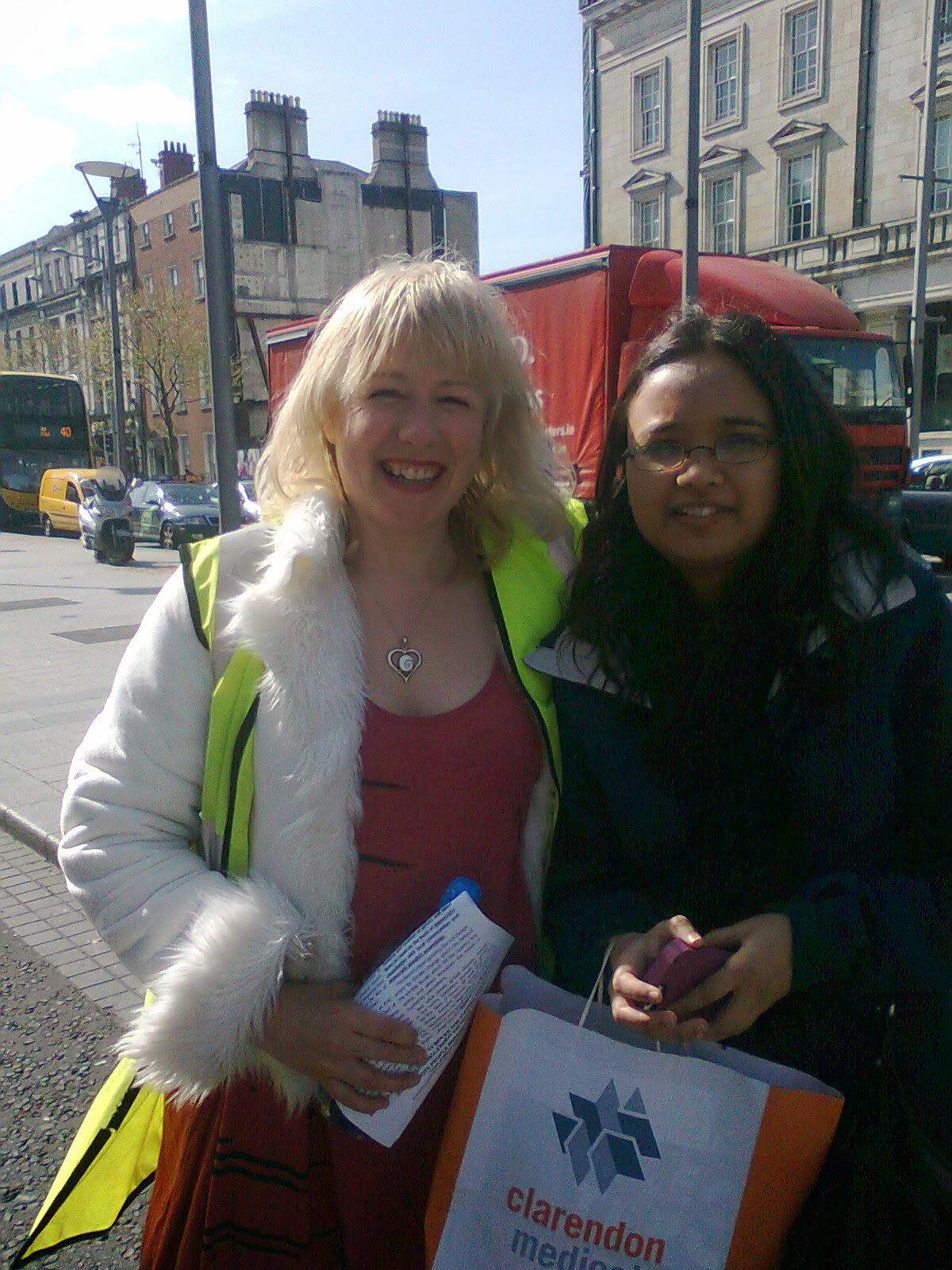 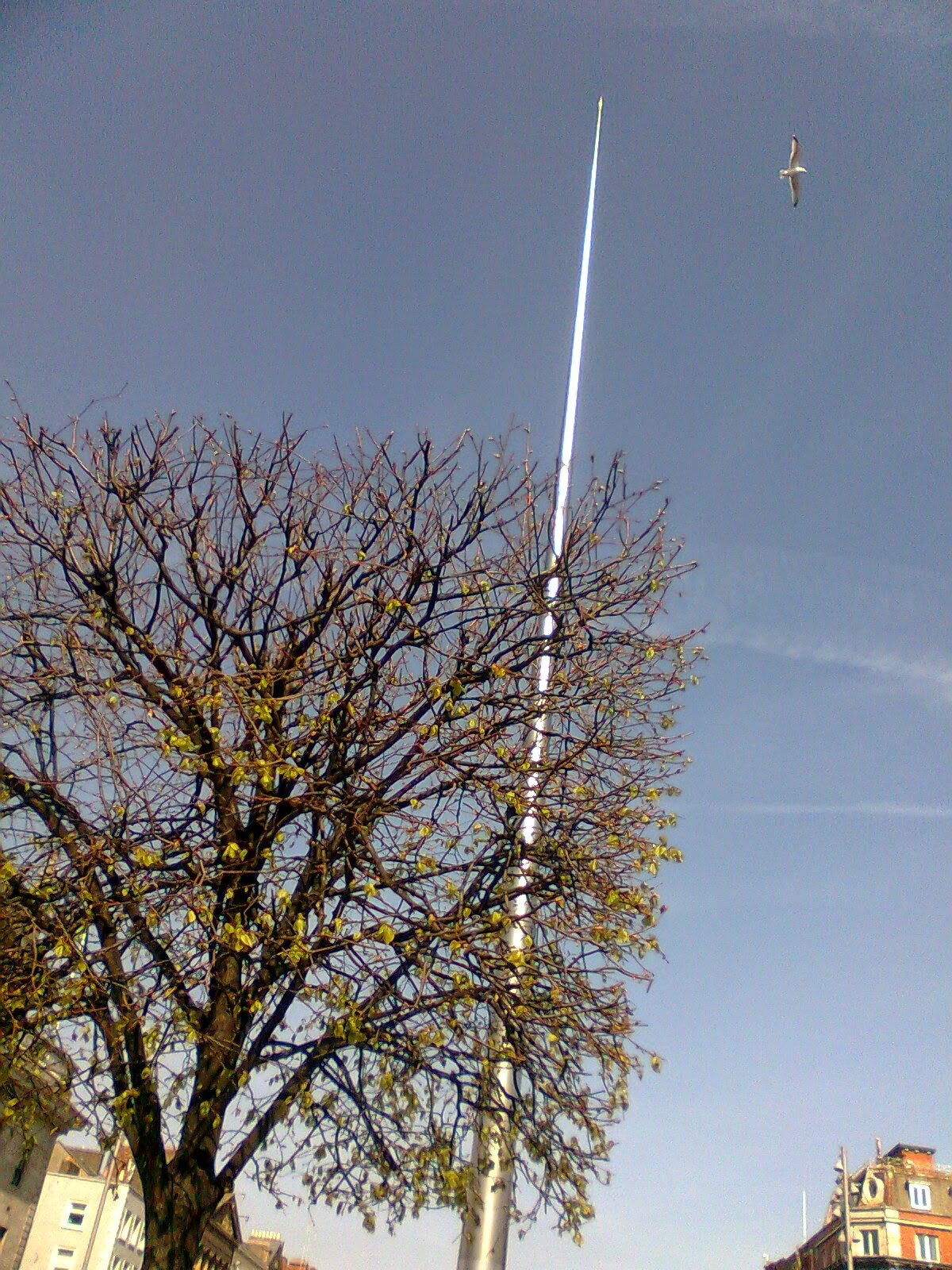 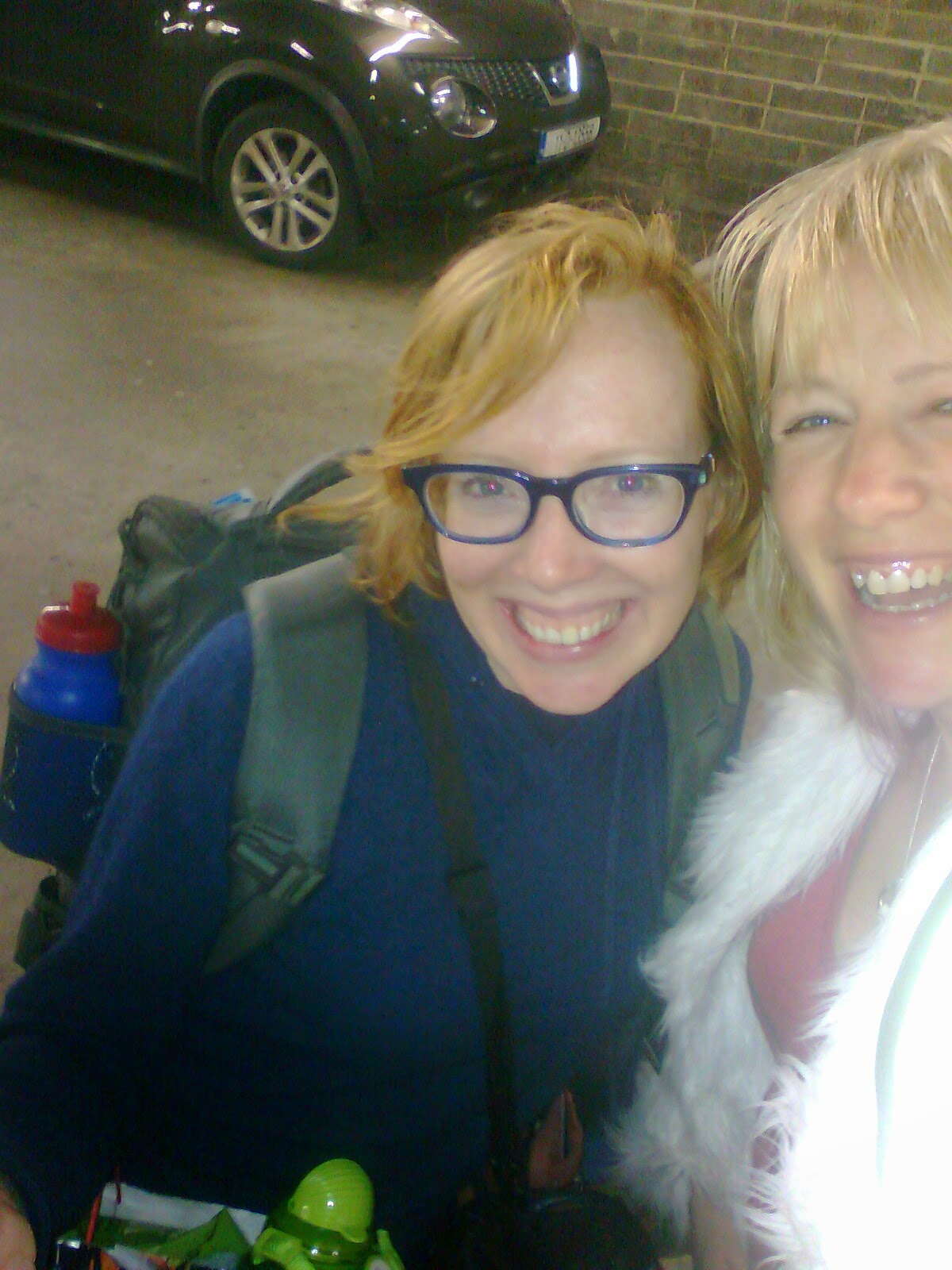 March on Dublin on Tuesday. I'm with Dr Manisha Namah in the first and Environmental Officer Allison Ruddock in the one above.

I didn't get a photo of one banner that was aimed at Pat Rabbit, who is largely responsible for the plan to industrialize Ireland's landscape and put pylons and turbines - the height of the spire above - every hundred metres or so across the length or breadth of the country. It read 'Put one in your own burrow, Pat' which made me smile. It was a Watership Down moment. We weren't rabbits but the storyline is actually the same. Our homes are all threatened by the destructive forces of big business and politics…or rather coercion and greed…much of a muchness these days.

I tuned in to see what attitude would befit an energy worker at a demonstration. Angry, righteous or victimized are all completely unhelpful when you understand the nature of the energetic universe! I came up with the generous concept that everyone is innocent in essence. I cleared that we as a people understand that the energy plans were an innocent mistake, none of us knew or could focus on how far reaching and destructive they would be. This acknowledgement of how we have come to a fight bridged the impasse between government and crowd. Instead of the defensive reaction and increasing web of lies - like pushing ahead and saying its necessary infrastructure where there are heaps of articles where the same people said that the new energy was for export and sales.  Also the way we see on our way up to Dublin or going anywhere, in fact, that they have gone ahead already, in the face of total opposition by the people and started putting them up already. Like this picture below. 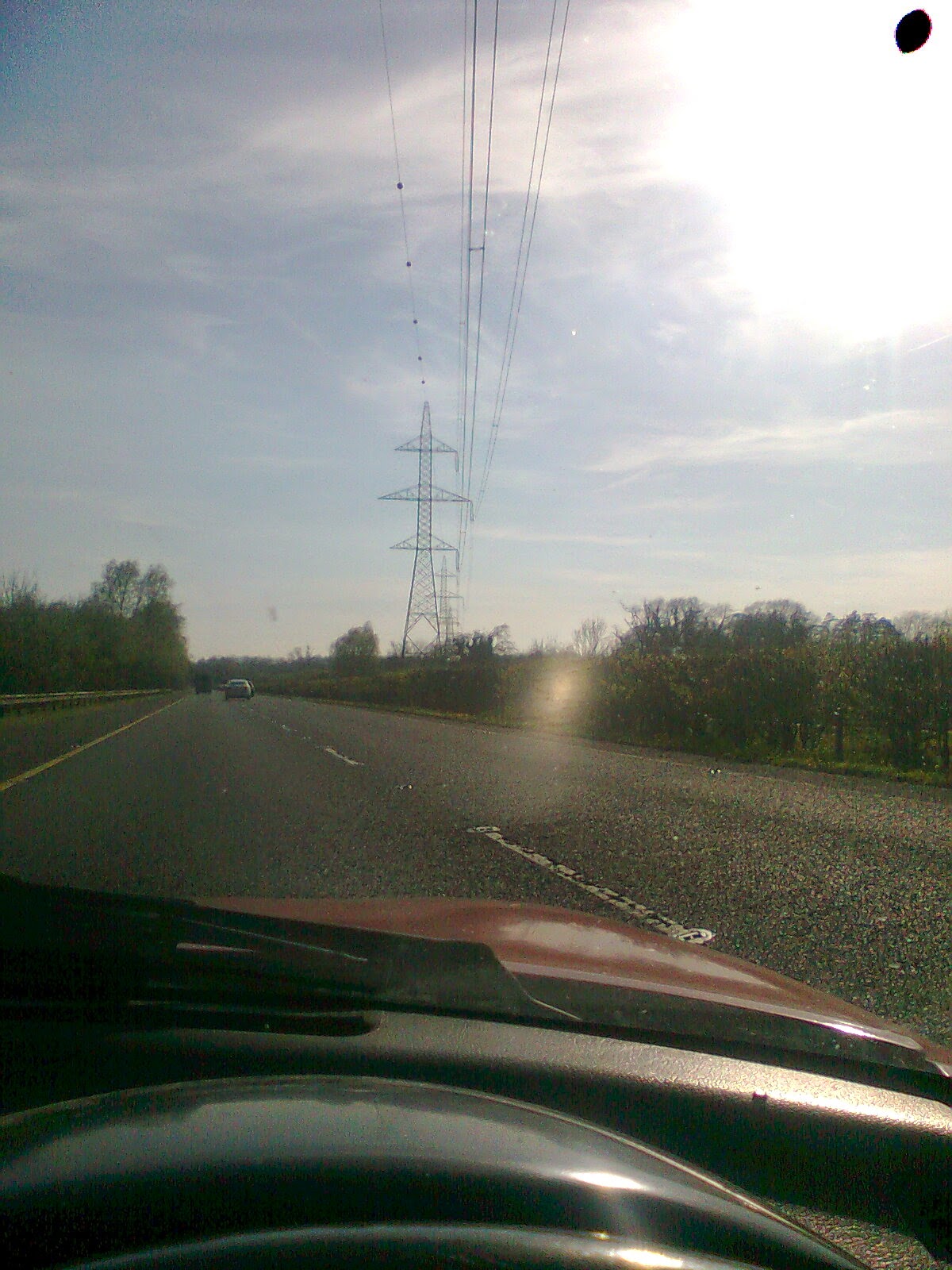 So I cleared all the people here and abroad who are benefiting from the pylon plan, financially or financially….yes it was quite simple. Then I cleared any ego structures for them that was stopping them changing their minds. We are all defensive until we release our identification with these roles and structures. It doesn't really matter if you're on the powerful side or the disempowered side…both are bad habits that can happily be corrected by distance healing…so I got on with that healing for the crowd gathering for the march as well!

Wonderful sunny day and they'd closed the roads for us all the way to the parliament buildings. Then I caught two sentences of the speeches over the 1000s of people standing around. Listen to this:
"We don't think there are going to be any affects to health caused by the pylons, substations and turbines but if you do have symptoms or your children do, take them to the doctor and get them medication"

Oh Lord…did someone in our government really say that?! What sort of medication? Maybe the pharmaceutical companies are already on board designing a compulsory pylon vaccination that we're all going to need to take! Ah doesn't that put your mind at rest!! Not really!

So the other thing, which was much more reassuring to hear was the request, clearly stated:
"We need a fundamental re-think of our energy policy"

On my jacket I had the resistance and a positive creation both represented. It read:

Use Tesla Technology
Free Energy for all.

I think we collectively sorted the situation out that day. Lets watch and wait with positive expectations as to what happens next!
Posted by Healing by Franc at 5:26 AM