How To Have a Kind Christmas 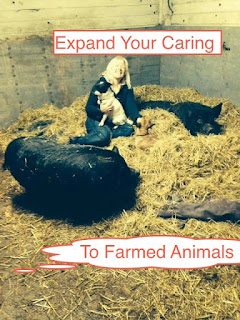 "For anyone despairing at the UK election result or the 'state' of the world in general...The most important thing is not to give up on each other or to become even further divided. We are being played - good an' proper - at every level and the intention as always is 'Divide and Conquer' - using fear and control of information to scare people half to death (and many entirely to death) and then point the finger at some other poor terrified person as the reason you're scared. Choose compassion, choose loving your neighbour (whichever way they voted), choose laughter - choose creating a kinder world by being kinder in the world. Starting...NOW!" Freya Lawton of The Peace Intention

I'm not asking consumers to go vegan and organic for Christmas...There's 50 shades of grey area, 50 shades of green and 50 shades of pink in-between... Like, what about checking that the turkey you buy and ham and beef came from animals that saw daylight. It's a simple golden rule, not to eat meat that came from intensive farming conditions. Or don't buy anything that says Halal-approved (dismembered for joints fully conscious, without stunning first). And only buy Eco clean un-damaging cleaning products. Or no cosmetics for yourself or others that don't have the Leaping Rabbit symbol on it. You don't really want to spray on perfume that was repeatedly sprayed into a trapped animal's eyes and onto it's skin until burn-levels were established?

Let's Label How The Animals Lived and Died

Somebody said how wonderfully traceable meat is here in Ireland. But the name of the farm means nothing, it's how the animals were cared for, housed, slaughtered, what chemicals used in its preservation or to add weight, colour, taste to the meat.

Let's Label What Chemicals Are In The Food

The Bord Bia sign or grown in Ireland has no qualitative meaning at all. It doesn't guarantee cruelty free or chemical free. Look at the vegetables and fruit and see if they've been synthetically coated in wax (it is plastic wax) or artificially ripened in a warehouse - as all out of season products from abroad are at the moment.

Yes, I believe vegan and organic and more than 51% raw diet is the way to go for me but don't think that the only other option is just buying whatever the shop or restaurant dishes up. They are not to be trusted. They want your money and don't care about your health or the care of those in their supply chain.

Every Purchase You Make Counts

There are so many small things you can do to make life better for yourself and others, animals' lives a lot more tolerable, insect life more tenable and water and earth a lot less contaminated. Consumers lead by buying what they want. So consider and discuss and study what you're choosing.

Don't Just Throw Your Cares Away Because It's Christmas

Please don't just think 'sod it it's Christmas' when there's always someone getting hurt in the background. Jesus wouldn't like it, Santa probably wouldn't either, although they both have a lot of unconditional love for us faulty humans. But he 3 wise men would be more discerning and the donkey and the flocks of sheep ... I bet the hay the baby was put in was not sprayed relentlessly with herbicide? Set aside spaces in your fields and gardens for genuine habitat...whoever shows up!

Who Are You Supporting This Christmas?

Maybe a more interesting question is 'who are you supporting this Christmas?' Did you get a real tree so you can plant it out after? Or a plastic one you can use again for all eternity?
I'm looking at the charity Christmas cards that have been sent to my parents. There's the Lifeboat Rescue - RNLI, Compassion In World Farming (although Trump...oh, I mean Johnson, just ruled yesterday that animals aren't sentient, they don't feel pain or suffer so we don't have to worry anymore), Oxfam who are trying to end poverty and Trocaire who are as well.
For me, of course, I want to support PAWS by getting their calendars for everyone and then presents from the crafts people I know - particularly Eclectic Interiors and Rosemarie Durr Pottery, both in the Castlecomer Estate Yard...though you'd be forgiven for thinking they were actually supporting me, rather than vice versa!! This is also true!!! I hope everyone is working up to a kind and cheerful Christmas.

I saw on the BBC news that they were talking about how there'd been some 'casualties' amongst high street shops this year. Some department stores were 'finding it hard to keep going' ... who cares? What about the real people and real life and all/anything that matters?

How Did The British Government Take Out Animal Sentience

from The Animal Welfare Act, against unanimous public outrage at the idea

About two years ago, the Tories took out sentience and there was an uproar in the press and amongst the public. They recovered their dignity by saying that the new post-Brexit welfare act would provide 'much greater protections for animals'. These would be decided on the 9th September 2019...a week notable by the fact that Borris Johnson shut down Parliament for that week - which was also illegal. No work was done, animals certainly weren't mentioned. Then there was the election...and now, less than a week later, they vote on the topic that people care about - animal protection...currently none for farm animals, animals in experimentation, sport, competition, entertainment, wildlife, pollinators, food or pets. So, a free for all for exploiters and polluters has just been passed.

The key is to take matters into our own hands. Supply and demand remember! Don't buy into pharmaceutical health plans, supermarket convenience, cheap products or pricy cruelly-sourced stuff.

Enjoy your first and all subsequent vegetarian christmases.

For my first vegetarian Christmas 24 years ago, I worked with homeless people in a cold weather shelter, cycled around london to find parsnips as there's some things that are evocative enough to make Christmas Christmas without the grim outcomes for other lives. I then watched the original of Dr Doolittle, a musical. I highly recommend it!
Posted by Healing by Franc at 10:11 AM