Pat Kenny is in Kilkenny, come on down to the RIvercourt Hotel at 10am, for Newstalk! 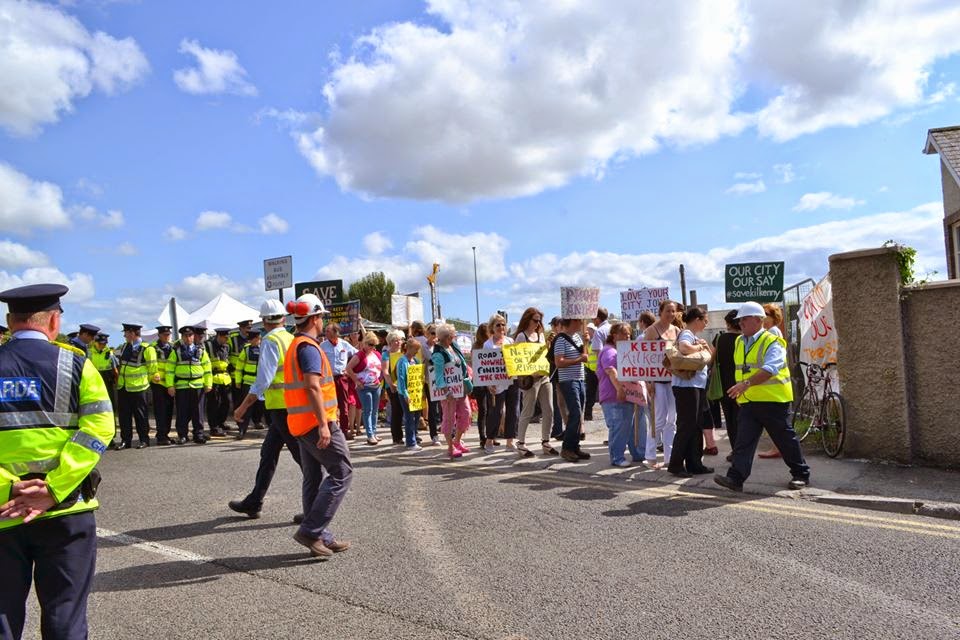 Looking for the gift in the following this morning:
Guardi deliberately sabotage the campaign to save Kilkenny.
Guardi called to the site of the controversial new bridge leading nowhere at 8am yesterday morning to say that they would be back at nine to escort a lorry in for the contractors. The actual time they had planned to bring the concrete lorries in was the afternoon, when they suspected that protesters would have run out of steam and dwindled in numbers.

It is disheartening that the guardai get to waste more and more time of the campaigners. We are already meeting the need to observe the two entrances 24hours a day. We are within our rights to be here and the work should have stopped when a review was agreed two weeks ago. We have homes to go to, jobs to do, children and animals to look after. It is a great strain and inconvenience to have to guard a place. The guardai and contractors are behaving like the Travelers do, at their worst. They are beyond the law, want to come in and trash the place, take no responsibility for their methods and are only self interested.

Us campaigners are a powerful force of reason, goodwill, conscientious objection and a resource for alternative solutions. This hair-brained scheme by the Kilkenny council and Tesco (yes their involvement has come to light) has been such a blatant affront to local interests that it has succeeded in waking up and uniting a great throng of considered judgement and considerate people. I gather that 10 for the central access scheme, 10 protesters and 10 something else will join Pat Kenny in an open debate this morning at the River Court hotel, to be aired live on News Talk - Where will they find 10 people FOR the scheme I wonder? Will they pay some people to speak in favour? Two weeks ago they paid for a 5 page advert in the newspaper with public money so we know the council will not stop short of lying and playing ignorant and 'hands tied' cards, as and when it suits them.

Pat Kenny himself called to Green's Bridge to see Camp Nore and meet a few of the protesters. It would have been very exciting for me if I had ever had a telly or listened to the radio and had known who he was! Our hearts rose to see him and he was willing to walk to the top of Greens Bridge and see the construction/destruction so far. I hadn't recognized him but the others had recognized all three that were traveling in the car - Pat Kenny, a Kilkenny council worker and the site manager. The implications are great. This must be why there is such poor biased coverage of the campaign's objectives. I would like to reiterate that we are pro Kilkenny, pro Tourism, pro clean drinking water, pro heritage, pro progress and pro democracy. We are fantastically peaceful, we will not be disturbed into aggression or fear.

The guardai know that they are acting outside their remit, doing the daily bidding of the contractors. The contractors know they are acting outside their remit, digging through bed rock which is under water - it is illegal to use this equipment if you can't see what you're doing. Complaints, violations and breeches of health and safety are reported every day about the cowboy contractors - the very ones who ruined the river a few years ago with the weir they built. Not fit for task shouts out of their every movement. The council as well are acting outside their remit. They are employed by us and soon we will exercise our rights with legal clarity and total vindication and sack the lot of them - except the two or three good councillors who can be put in charge of leading the city out of this quagmire.  The contractors can put the site back to a natural state and undo all the damage, take away all the piles and stone, the guardai can learn a lesson or two about the law I hope and Tesco can go to hell in a hand basket if they want. They have had their fun on one too many river bank for my liking!

So if you're in the neighbourhood about now, stroll down to the Riverbank Hotel in Kilkenny and let it show that Kilkenny people want to keep their beautiful medieval city intact.

Posted by Healing by Franc at 1:50 AM