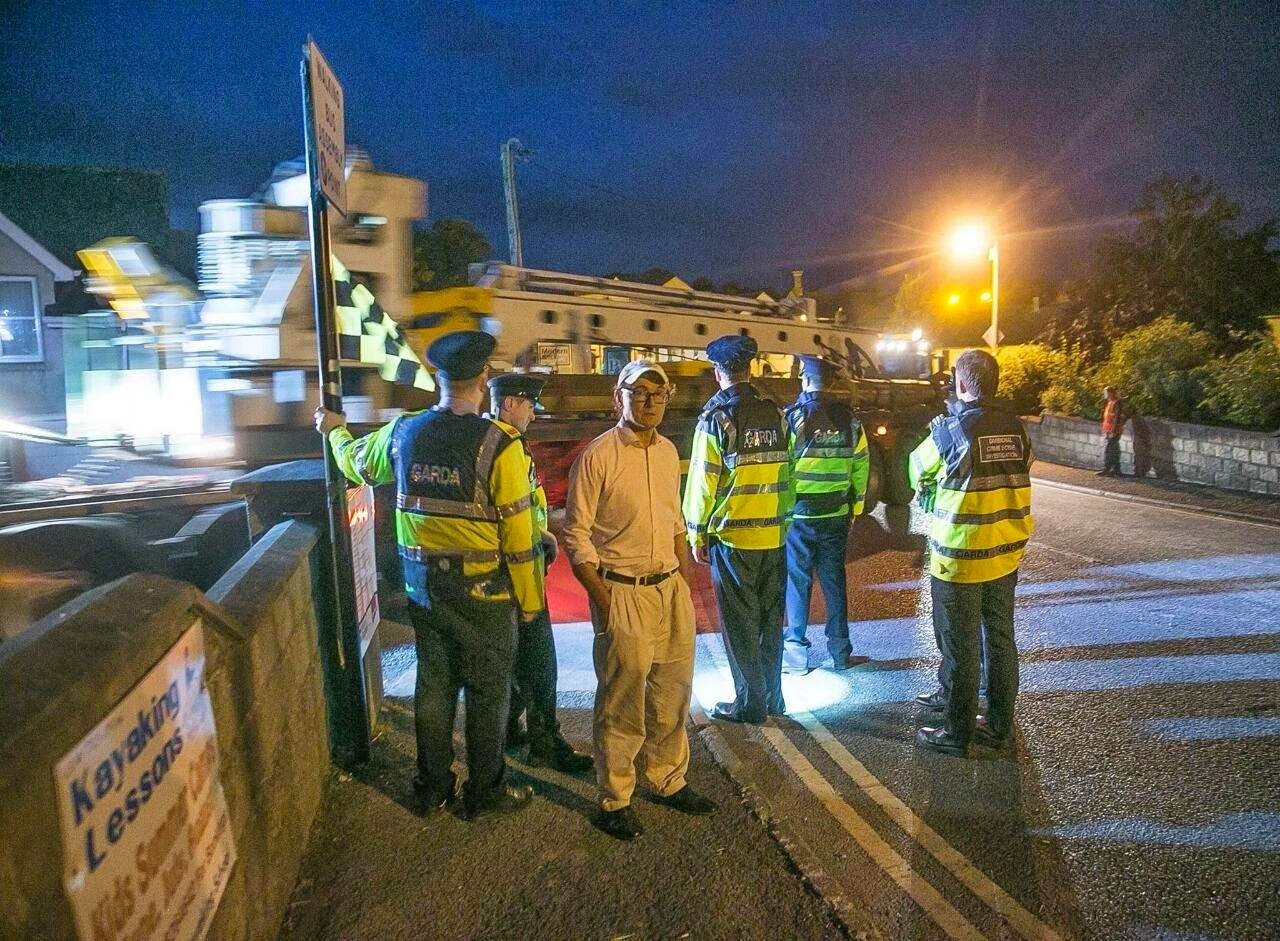 At 4am this morning more than forty guards plus the riot squad turned up at the site of the planned Central Access Scheme in the centre of Kilkenny, to do the bidding of the council and the enlisted cowboy contractors. For the last two weeks families, professionals, old and young have been keeping the heaviest machinery off the site – 24 hours a day. Instead of putting the plan on hold, they tried at 4am one day and at 4pm another day. It was a massive pile driver, needing 7 lorries to carry it, to ram iron girdas into the River Nore. Symbolically, the council are the pile drivers, bullying their way on against complete public objection and the gardai are their pole dancers, kidding and laughing appallingly at the people holding the line.  The citizens have pointed out from the start that both the council and the gardai are supposed to work for the people not the corporations.

The lies
The council invited the community of people who opposed and were protesting, to a meeting. The supposedly neutral mediator was the superintendent. The meeting was just an opportunity for the council to say that the machinery would have a garda escort and people would be taken away if they blocked their entrance. If the machinery was allowed in, however, it was promised that no work would take place until Monday. By half past five this morning Friday, they were already assembling the driver. During the meeting when protesters down at the line were still thinking that a real review might be arranged, the contractors got the opportunity to get five more 60-tonne lorries of stone down to the river. It was supposed to be washed stone. The pollution of unwashed lime stone dust has already damaged the river, suffocating fish. The council have used old lines of the right to remain silent, confidentiality about who is benefiting and who signed off on the contract. It happened amongst the old council and the newly elected councilors have a key opportunity to stop it, instead of defend and deny its absurdity.
A motorway bridge right into the Medieval Mile of Kilkenny… leading nowhere, coming from nowhere as planning permission has not been granted for an adjoining road yet either side! It is not just over the river, it is a flyover, standing above peoples’ houses and dominating the small city – just meters from St Canice’s Cathedral, the most ancient monument.

The people are not being listened to. As Ann Phelan is made Minister for Roads etc, she faces her biggest challenge on her own doorstep. The County Manager, John Mulholland, has invited the protesters to help form a citizen’s forum to look at another related site, the old Smithwicks Brewery. This is obviously another lie, distraction, delay tactic, along with the lies told to the paper and local radio; that work had been stopped until the review meeting on Monday next. The citizen’s Forum is a good idea but for the bridge, not for some next project to be rail-roaded through. We need the whole country to support  the stopping of this project ASAP. People were crying and drenched this morning. They have done their best and legal means are expensive, especially when all the formal bodies are prepared to say what they want, regardless of the truth or their formal responsibility. That could get very expensive for the individual. Naming and shaming is the only way. The bullying tactics from Council and Gardai are standard. So is the power struggle. The scheme was a final blow dealt by the last county manager Joe Crockett.  Like North Korea’s leader, he just wanted to show he had the power.  Those old institutions might be stuck but lets transcend convention and predictability. Please help get the truth and awareness out to everyone and get the bridge stopped today.