http://www.blogtalkradio.com/creatingcalmnetwork3/2014/07/17/new-directions-with-frances-micklem
Tonight at 10pm on the link above and afterwards on demand.

This is what's happening in Kilkenny and how everyone can maybe get involved! 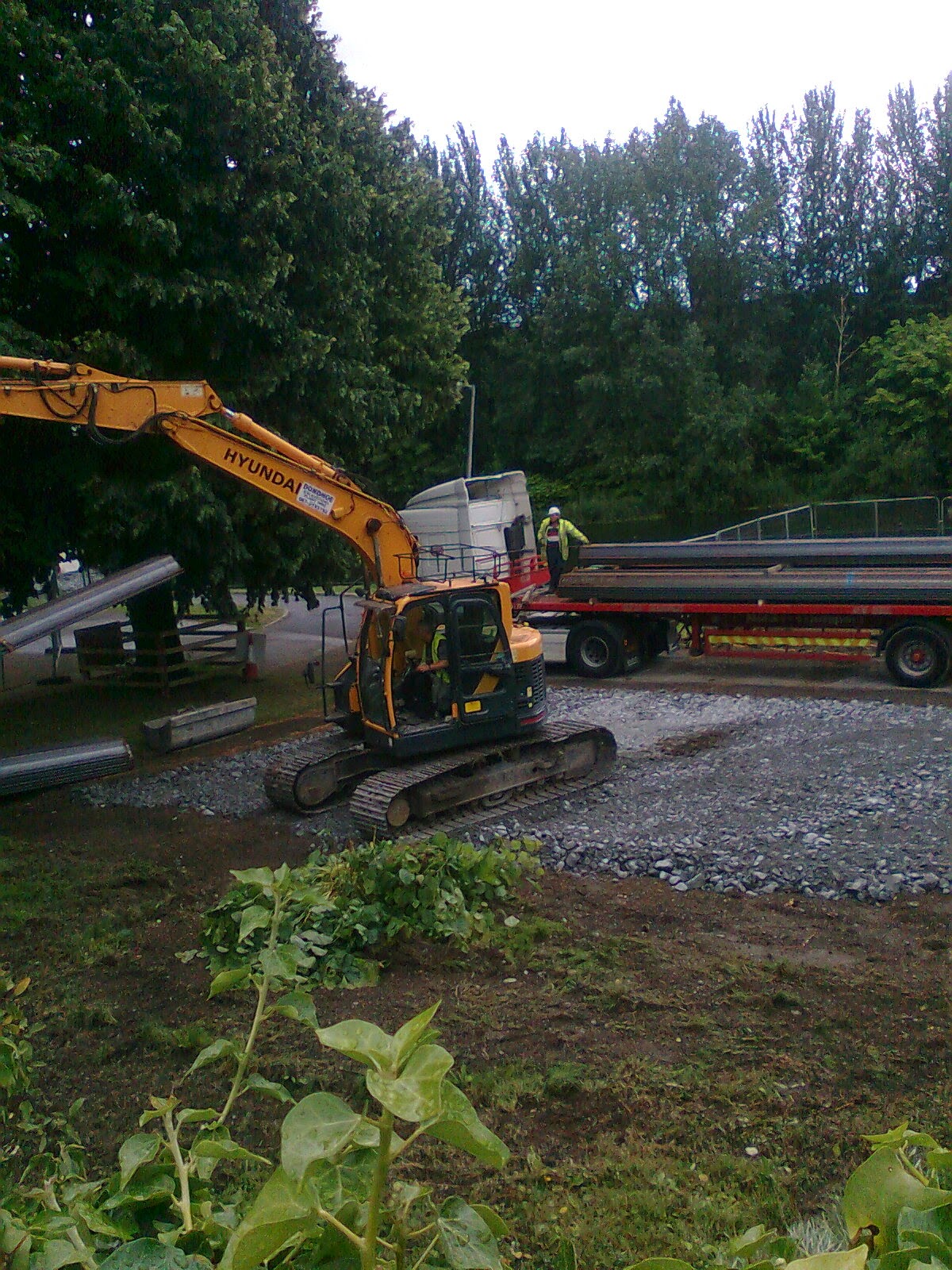 All those trees will be gone and the river that can just be glimpsed to the left of the lorry is being polluted recklessly. Not to mention the bats and the god-forsaken citizens who may have to live under the road.

Copy of Letter to Cllr Ann Phelan - When international policy is all pointing towards getting heavy traffic out of towns and cities, 5 key players in Kilkenny are driving metal posts and unwashed rock into the river at the centre of town to build a motorway bridge with no planning permission for it to lead anywhere on either side!!

Dear Ann, (ann.phelan@oireachtas.ie if everyone else can send a letter too!)

Thank goodness you have been made minister for marine life, transport etc for Kilkenny. Our beautiful medieval capital needs you asap to put the CAS on hold before they get through with more unwashed stone and pour it into the river. The contractors have no regard and a very bad track record - having had to remake the weir further up the river recently as the salmon couldn't get up to spawn. There have been fish gasping for breath with the lime dust already and the head of the EPA team seen laughing with the contractor on site. You have got to help the people (many of whom are protesting and nearly all of whom are objecting to the random vast bridge erection, aimed at a few listed buildings - on which no planning permission has been granted). You have got to help them prove that regard, truth, compassion and sense can impact on greed and ignorance. It is not enough or appropriate for the council to hide behind the right to remain silent, claim ignorance or confidentiality of key people's identities. Just because its started does not mean it must finish. Stop the works on all the grounds of health and safety violations (I myself witnessed a girda fall from a snapped winch line, dangerously close to a workers feet). Stop it on concerns of threat to fish and other wildlife. Diageo the brewery themselves insisted it was put on hold as the threat of pollution was so guaranteed that they stated it would reduce the quality of their product. There are just five people pushing this through, owners of the mart, the contractor and a few others who are benefiting, within the council. The decision was made before the recent elections as you know, so retract it. Extricate the CAS from the development scheme and refuse the funding for it. It would not be money well spent. If the bridge is built it will be a license to overthrow any objections to the rest of the destruction planned. Stop it right now and the people will support you. I know that a minister recently was threatened for speaking up against the scheme. This is bullying and you must not let bullying define what happens next.

*the planned road will dissect the city; running directly through the Medieval Mile (recently launched at a cost of €5.5 million), at the foot of St. Canice's Cathedral and tower (Kilkenny's oldest standing structure)

*the road will run through the old Mart site; this would be an ideal location for a much-needed secondary school in Kilkenny; currently there is only one (Kilkenny College) on that side of the river, but with the large increase in population in the area - young families in particular - there will be a desperate need for a new school

There is an ongoing 24/7 protest at the construction site, and it is gaining support with each passing hour. We are ordinary people, with jobs and families, who cannot stand idly by and watch as a beautiful and invaluable part of our historic city, is destroyed (in the guise of progress) for short term gain. This proposal was originally hatched in 1978, and it was scrapped then, as it should be now. There are numerous reasons why the proposal is a disaster, some of which are articulately expressed in the following clip:
https://www.youtube.com/watch?v=7knfZEaxQD8...

An Taisce, who are totally opposed to the scheme, recently rated Ireland's county councils on their planning systems; Kilkenny was rated 'E', the second lowest grade. I refer you to the report:http://cdn.thejournal.ie/.../20120416StateoftheNation…

We implore like-minded people of Kilkenny and those anywhere who have a similar love of the city to spread the word as to what a disgrace and mistake the proposed central access scheme (CAS) is. This is long term destruction of our residential and medieval cityscape. The completion of the original outer Kilkenny Ring Road is still planned and required.

I urge you in your new capacity as Minister of State at the Department of Agriculture, Food, Marine and Transport, Tourism and Sport, to act as a voice on behalf of the Kilkenny people, and intervene immediately. I believe it is within your remit to involve yourself in this situation. Very best regards, Frances Micklem -
Thanks to Deirdre from the protest at Green's Bridge for the second half of this letter - as in the facts and research in the second half!
.
Posted by Healing by Franc at 12:15 PM