How to survive Valentia without moving there permanently 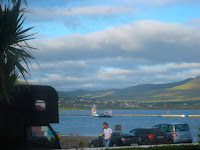 I would love to see other ways of life and yet see them from here - if you see what I mean - rather than land myself in the middle of India or Spain and try and grasp what's going on. Or Ireland for that matter. I got a chance at a friend's party in Westport last Saturday. It feels like a lifetime ago but there were some interesting people there. Not one of them minded where they went next and when. One guy from Spain who had just been to climate camp in Tyrone. Why do I always think of Snatch when I hear that county? I think its Tyrone who's hopeless but is supposed to be driving the getaway car. Anyway, there was also a couple from England and France who'd been travelling together for a couple of years. They really got on well and were the personification of aliveness and relaxation. They were only about twenty but I learnt a thing or two. Like 4 breaths per minute is really plenty.

Sort of as a result, I've decided to concentrate on making this place a retreat centre, keep it cheap and let people come and wind down and be well however they want to. Just offer the space. Energy healing, silence, music, sleep, food, outings and a help exchange to keep the house, woods and stream maintained can all be options. Wax on, wax off as they say in the Karate Kid is a totally valid spiritual practice! God knows, I've been two days solidly doing it; painting my windows in the sunshine.

After the party, I was just coming back to Kilkenny to a clearing and suddenly it wasn't happening so I was free again. I found myself driving south listening almost exclusively to Bruce Springsteen Tunnel of Love and The River albums. It did occur to me that only the boss really can refer to people as Baby and to himself as Baby too in certain circumstances. I just couldn't see it through. A friend of mine did once but it was nipped in the bud! Maybe one needs the drawl. I can imagine obviously calling a baby Baby but then once one is in charge of a baby one should really know its real name, no? Anyway, at the moment I'm not, so it hasn't cropped up. But I have been thinking I'd like a star baby since the Inter galactic conference. How would you know what you're getting though? I suppose you hope for the best and then can be happily surprised if it starts to show very mild super powers. So, to be absolutely sure how much I love Valentia, I went down to the island again.

So many people are missing parents already it was a moving time to see mine. To be precise, to be surfing with my Dad and Mum and all my family on St Finians for two days. My Dad is probably 82 this year and I can't think of anything I love more than looking across and finding him on the same wave. My sister's more dangerous as she makes me laugh and then I can swallow water and drowning becomes imminent. Couldn't go under this time though, as there were so many children to count and make sure they hadn't been dragged out on the rip tide. My brother's children were there too and other friends. People getting married and people addicted to chocolate and people who'd rather be on Glanleam Beach but fitted it in before dawn or after dark so as not to disrupt the wider plans.

I heard there was a derelict hotel and airport on Reenroe Beach nearby and hit on the idea of restoring it with fractal energy and sacred geometry and making that my centre. It was a right red herring once I saw it. I'd be clearing for years the vibrations there and having back to back torturous Wuthering Heights moments on the windy cliffs. Probably not make it. So I gave the lads a lift to the ferry in Cork and came home. Is it ok to jack it all in and just float around in the sea all day? I have reached a temporary compromise and am swimming a mile in the gym every day. 76 lengths and for each length I acknowledge the equivalent dimension and melt back in to reasonableness and productiveness for the rest of the day. I have also worked out 'You are an ocean wave my love' or whatever its called on guitar.

Thanks to Ivan Kelly for the african art detail in my room, Phil Blackman for the cranial osteopathy that has got me back to centred, Stef for the beautiful bird table and Eric Dowsett and co for the clearing when I was knackered. Its all back on with life now and I intend to sing my soul mate in - which is an interesting idea I got from the film Australia. Think I might get some lessons in or it might just have the opposite effect!
Posted by Healing by Franc at 2:07 PM