Taking Up the torch for a pound Dog

I am trying my hand at fostering, through the Protecting Pound Dogs system. It's funny how it happened as obviously someone like me mustn't look at dogs who need a home!

The thing was that my parents were thinking of looking for a new dog to replace beloved Jonah. Jonah was black - and hard to see in room with no light on. So, the question came up, should it be a golden labrador puppy - with microchip and background check as to it's genetic lineage - good hips and eyesight etc or should it be an older, established dog. Maybe a rescue dog could work but mightn't they have issues?

I swear I only clicked on one picture. Lucretius was in the pound right now. 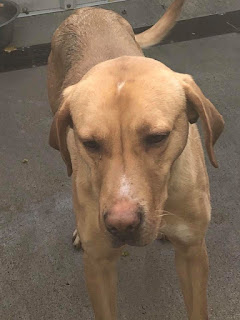 Then I saw his soulful eyes and ribs and without another thought sent the photos on to my folks and said what about if I look after him and get him to his former glory or full potential - health and family-dog behaviour wise - then they wouldn't have to worry about that bit. As my back is so weak at the moment, I am here anyway and happy to do that work. 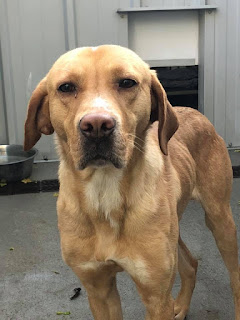 They wrote straight back and said they want to find their dog and meet him (so over in England) and not yet, more like next spring. So that made sense and that was that.

Or was it? Of course, the next morning I woke up and thought, well I can hardly leave him there now, can I?

The brilliant Protecting Pound Dog system means that they knew of the dog, knew he needed fostering before rehoming in his hopefully forever home and they found out that he hadn't been booked to go elsewhere (like PAWS of Dogs Trust I imagine or another local interested in him).

Yesterday, lunchtime, my good friend and neighbour Klaus took me down to collect him. Brian at the pound was great, despite a few jibes about how raw bones and livers and hearts would be the best thing for Lucretius to put condition on - even after he said he remembered I was vegetarian! He even suggested Green Lipped Muscles from New Zealand for my back ache! But I didn't get drawn into my week's topic of 'How To Heal without eating anybody else's body parts or tested, casein-drenched drugs!' He said the dog was 'unsure but really wanted to connect' and in that he was spot on. He microchipped him and carried him out to the car. Very scaredy cat, with tail between his legs but not any more!


His kennel name is Lucas, formal name Lucretius, who was my favourite Roman philosopher poet.
Posted by Healing by Franc at 4:02 AM