Here are the lovely pigs safe and it's not often you can say that! See it on my Facebook page either as that link isn't even working for me!

The first I heard of them, they were described as juvenile but friendly and I said to myself well, aren't we all? But up at Sheerans that was not thought of as good enough excuse for hanging around the pub all day! Thank goodness for Mary who is, like myself, a keen horticulturalist and animal lover at the same time. 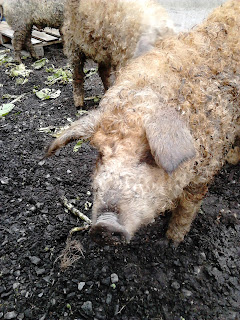 There ensued an effort to find the original owner and slap them about a bit for neglecting them for their short, so-far lives. You would guess they had never seen daylight before that day's escapade.

All the authorities, people with herd numbers, local farmers and the gardai were called and ruled out and then a home could be sought. 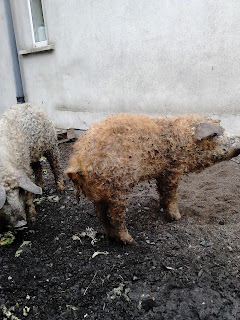 Poor little guys but courageous too and they've won their freedom and a long happy life!
Posted by Healing by Franc at 3:57 PM

Email ThisBlogThis!Share to TwitterShare to FacebookShare to Pinterest
Labels: Animal Rights, From The Pigs' Perspective