My brother said, why not be a gardener rather than a farmer? As I was bemoaning planting huge swathes of crops with such uncertain weather. I replied, being a gardener is like being a builder, you never have time to get to your own place.
Obviously organic bread is a must partly because 90 something percent of bread has pesticide traces in ti and also it can be made with no yeast, which is another pressure off your digestive system...and pumpkin seeds that are anti-parasitic...another pressure off the ol' tract. 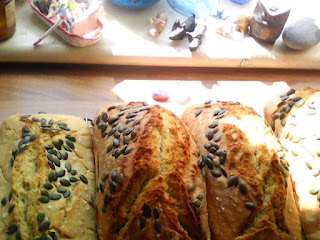 But my top tip to going organic is this:

Try and weed more than once every two years as otherwise the moment for productive farming might have passed and you will be sorely tempted to move straight on to re-wilding instead. 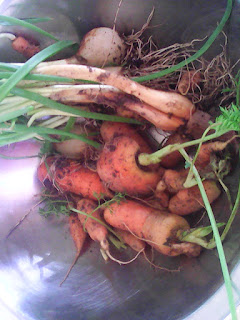 I had asked myself why I'd given a whole raised bed to daffodils...even though they reminded me of my days as Professor Sprout of Herbology fame, in Harry Potter. 900 children passed through Castlecomer Discovery Park for that themed day and although there were a multitude of activities, the majority still got around to planting onions, garlic and daffodils in the magic invisible greenhouse (bit of an Emperor's New Clothes situation!!)

So, today, I decided to claim some of the space back for a hazel tree nursery - there are 13 two-inch-tall hazel nut trees in this picture (and one avocado). 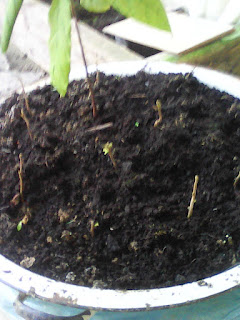 U also got serious about organic certification. I attended a webinar. I went through the pack. It's not for the feint hearted: You have to enclose water samples from all your sources (I have a gravity-fed grey water system for my polytunnel. I have butts for the avocado gallery. Then there's the stream and of course if push comes to shove, the mains.

The gang in Bagenalstown tell me that I have to specify what the Organic Trust are looking for. I said, well, let's say 'is it safe to drink?' How about that as a parameter? Well, yes, he replied there's an all-round wellness water sample test that is 150 euro. It checks all chemical and bacteria present. Oh great, so that would cover pesticides then, I said. He said, oh no, we don't check for pesticides unless we're asked to.

So then there's the amount of land you must have. So that could get pricey. Then there's the Organic Training that you must get for 200 euro. Then there's the application itself which is 200 euro. Then there is presumably planting with all new organic seeds, heirloom and heritage seed varieties and those sorts that come in a Brown Envelope, 5 at a time for a fiver. Then they want your vet involved in your animal plan. I'm sure they won't do that for free. The special housing for organically-kept livestock is also different and changing - fractionally higher welfare than intensive and conventional, like calves must be 12 weeks with their mother. But they don't go as far as saying pigs should have bedding. They only say they should be 'thermally comfortable'. So, going for organic certification is a bit of a pain but I'm going to see the application through as I feel I can consult and support others with no time to spare (aka all farmers who are working 15 hour days) if I've done it myself.

One thing I know is that pigs love foliage and bedding and making their bed and sometimes even rearranging their home or moving out, when their partner's doing their head in. 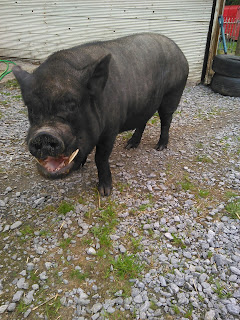 Legend, when Becky moved out 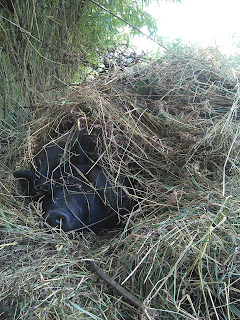 Becky's pad when she moved down the garden for a break 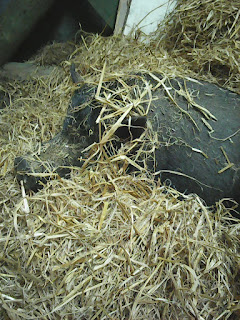 Becky in her and Legend's bed

I asked what was the most important thing for farmers to engage in the green transition. One farmer said, 'solar panels'. They could easily feed the whole grid if supported in covering their whole shed space with panels. As it is, they're only allowed to produce 30% more than they need for their own operation. Community Energy is a real possibility.

Email ThisBlogThis!Share to TwitterShare to FacebookShare to Pinterest
Labels: Environmental Solutions, From The Pigs' Perspective, Geodome & Self Sufficiency