So Many Risks and No Helpline

How to Take Responsibility

When I say people should take responsibility for the jobs they are doing, I don’t mean they should feel guilty. After all, it is not one or two managers of TESCO who have bankrupted the town councils of England appealing their right to build superstore after superstore on river banks that were once home to biodiversity and many now extinct species, and contaminated the water ways.

Although, #KariDaniels, Chief Executive, #GeoffByrne. Chief Operating Officer, #SarahGallagher. Legal Director, #JoeManning. Commercial Director and #CathalDeavy, Customer Director are all playing their suspect role by perpetuating the multi national misery in Ireland, in recent years. So what should they do? They should gather their evidence and leave their organization to share it, while they have the credibility.

An example of this was my friend who shared the short falls of the shuttle disaster and won an award for moral courage in business and government. More recently, Head of Research at Pfizer left saying that a vaccine ingredient would render women unable to carry babies full term. What response does he get? Well, interestingly, the internet ‘fact checker’ declares to know better that the man who gave up his career through conscience.

But we also hear that you should not get pregnant for two months after this vaccine. Why not? And in Ireland, the government issued advice is that if you’re pregnant right now you count as vulnerable and should have the vaccine at once. What an un-reassuring combination. And there’s no helpline. Big pharma are taking no responsibility themselves, to even answer questions. Call your GP if you’re not sure! At least that head of research at Pfizer will have his own peace of mind that he acted independently and shared the risk of mass sterilization and heartbreak for so many of the population.

But how do we take responsibility for ourselves, if we’re not in such a big position, wielding such information? We use discernment in our participation in the bigger story of saving our humanity and becoming stewards of the countryside and sea…remember one instance of awareness and kindness reverberates through the whole.

For myself, the way to express this unity was to visit my parents at Christmas. There was no way I was having some poor uninformed volunteer stick a swab up my nose and down my throat (surely everyone knows to deal with these orifices separately? Like the anal and the urinary tract, they might tell you something but you don’t want them tested with the same swab, not to put too fine a point on it). It is an unreliable test of 44 cycles and would be to see if the virus was active in me. when even Fauci, who seems to want all us plebs dead, says that 33 cycles is the maximum where a test can show a reliable ‘positive’. 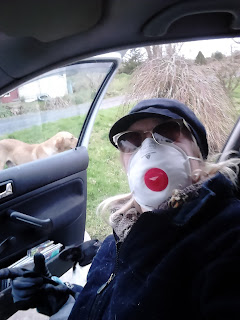 So I decided that I would quarantine for 14 days rather than 10 and then I would be sure that I was absolutely fine. Goodness knows, I have kept myself to myself since the beginning. The circus started to appear. People know that I think everything through, but no one has asked me for my reasoning. Some thought me irresponsible for questioning the restriction decisions. But the restrictions said only 10 days quarantining.  So I looked into both and it turns out that the reduction to 10 days is only arbitrary and probably an economic decision or peer-pressure decision and yet another way to foist other test and trace controls on people.

Still the way I did it, I connected with the people it was important to see, I put no one at risk, we stayed al fresco that boosted all our immune systems and it got us off-line for a stretch.

Please everyone keep making your own decisions and don’t rush yourself or the ladies in your lives or your parents to have the vaccine or you may only have 17 more good minutes with them or a pregnancy problem. These vaccines have DNA and RNA connecting material plus goodness knows what else (ie nano that will help technology pull strings in you forever) and it doesn’t wear off.

I really believe we are all stronger without it, at very least. And live our lives in self trust and secret joy. It has to be secret as I gather that the most we’re allowed to display in public is being asymptomatic.

Posted by Healing by Franc at 5:23 AM