Did you get the memo?

Is it six months since Kilkenny County Council declared a climate change and biodiversity loss emergency and unanimously agreed it? No one else in the council seems to have heard about it! 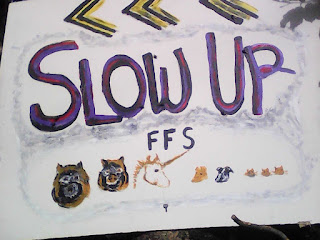 Is it possible that following the unanimous agreement to declare a climate change and biodiversity loss emergency,  that there was not even an internal memo sent to the council’s own departments to put any sort of focus on this?

I would like to raise three specific instances and requests. Firstly,  council workers are still spraying pesticides and herbicides on hedgerows…formerly known and recently accepted as being important as habitat. Outside my own home, in the middle of absolutely nowhere, I found a group of council workers strimming. They said that it was for safety around the junction. The junction was over 200 metres away.  They agreed that it would in no way help with seeing around the corner, even if they strimmed right up to the corner. They agreed to put my sign up as much more useful. I asked them had they heard the the council had declared the environmental emergency and they had not. They said they were still doing a lot of spraying too.  All those sprays are poisonous to wildlife, I thought you understood that now. And poisonous to our food.

Secondly, in regard to poisoning our food. I ask Kilkenny County Council to make a request to government to halt the new VAT of 23% they are threatening to put on Health Food Supplements on November 1st. In case some in the council don’t know, Kilkenny City supports 4 extremely good health food shops, which basically supply natural and chemical-free food and plant extracts to support the immune system. We are talking about the trace minerals and vitamins that our lifestyles and food no longer provide and also boosts for people who are vulnerable or under physical pressure, like in training or during pregnancy.

To derive good quality products requires diligence at every stage of the supply chain. Everyone knows that producing high quality, organic small-scale plants and remedies takes skill, time and more money than mass-produced convenience foods. Instead of supporting health food shops, their suppliers and customers, the government is recommending that people over 65 or pregnant get a flu vaccine.  Our complex and brilliant immune systems can fight any bacteria, virus or fungal infection, if people are given affordable access to health supplements and education on their diets – to reduce sugar as it blocks the absorption of vitamin C for example. Please make a collective statement to the government to stop this VAT, which will make them unviable, unsustainable, unprofitable, intolerable and consequently shut them all down and compromise public health still further.

Thirdly, the council have not told the local department of agriculture office about the emergency or an adaptation plan or even to include it in their assessments of new farms, planning permissions, licenses or herd numbers. I have just had my inspection by the local Department of Agriculture and been approved to become a farmer and been awarded a herd number. The inspection was carried out by two senior, County Vets. They checked that automatic water was available and that the fencing was secure. We talked about the 5 freedoms that should be afforded to farm animals and they were amused to hear me mention them. The one improvement they remembered was that sows are no longer tethered in their crates. One stood up for the use of concrete and steel as the best way to avoid infection. I showed them my organic growing space and descrbed why I feed organic pig nuts; so that the manure they produce can be used on the land to feed the soil. I showed my rainwater conservation measures and the re-wilding of my garden and turning it to mainly native and edible fruit and nut trees and shrubs. I asked them what had they added to their farm inspection criteria to support biodiversity recovery  and address the climate emergency. That is when they said they had not heard of the council’s declaration back in April.  Not one thing.

Please send that memo out. It can say simply:
There is to be no more spraying of pesticides or other chemical use.
Budget and time spent previously on that can be used pulling ragwort and other notifiable and noxious weeds all over council land and verges and planting in their stead, willow coppicing plantations or fruit/nut trees or wild flowers. Bare root planting starts now and spring bulb planting starts now (autum). Let’s seize the moment and show the birds and the bees that we’ve got some cop on.

There is to be a clear and public veto of the natural health supplements VAT  from Kilkenny County Council, on behalf of its people and demonstrating awareness that will support every county in following suit and the government re-thinking its proposal.

There is to be a clear change of direction in Agriculture, with a focus on quality of life for workers, animals, wildlife and land. Inspections could involve a simple survey of soil quality, water quality, responsible animal ownership and supports offered for organic standards of practice, produce and welfare.

I am not even sure if you have got the adaptation plan totally worked out, these things take time I understand. But get each draft out to each department for consideration and additions. Don’t wait until everything and everyone is dead or wishes it was dead through ill health, intolerable conditions or toxic breakdown…and that goes for people and animals.

Many thanks and kind regards,

Posted by Healing by Franc at 8:30 AM