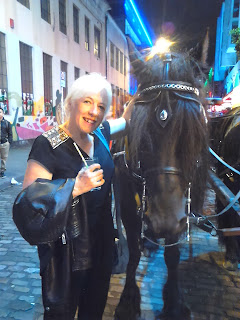 I stood with these horses for twenty minutes and they still had not got their breath back. One guy said they were finished now and getting water next. The other guy said a couple more jobs and then they'd be finished. He said he used them for weddings but this all day, all night tourist chariot missions must be regulated. Water should be compulsory and available not just before and after their shift.Also notice how they have stuffed their massive forelocks inside their blinkers, it was the height of discomfort and I gave them water but not a deep drink, just a little in my hand from my glass. Please sort this out, thanks, Frances


Next this: Please write to the above address too and add your voice, shock, sadness and requests for change.

Stop sows tethered in crates in Ireland - Irish Times
1996 that article was written and look at the situation still.

''But that doesn't happen in Ireland''
YES, IT DOES.
Today, we exposed a living hell on Earth for these pigs, in Co. Westmeath. We stayed here for 7 hours, taking photos and videos, staying inside until we got media coverage.
These individuals were kept in small pens that were so filthy and full with their own waste, that many could barely even stand up without slipping. Their bodies were bruised and cut. There was barely any water, and what was there was contaminated with waste. We saw so many licking up urine from the ground. The heat was so intense, it was unbearable. The pungent, vile smell is still lingering on my clothes.
One particular pig was bleeding from her mouth and was unable to move for hours on end, barely even opening an eye, flies all over her body.
We don't want your sympathy, we want you to see these beings for who they are, sentient beings whose rights are being violated, and whose liberty and bodily autonomy is being taken from them, so you can eat their flesh. Every single time you eat their bodies, you're supporting this industry.
Today has shook me to my core. Never tell me about what animals you've eaten in a passing comment, never tell me how their bodies tastes, and I won't be sitting with you while you eat their flesh, because every fibre of my being is against what's happening to these individuals.
*Photos from TinaVLeo

Posted by Healing by Franc at 3:19 AM