The personhood of all beings. It has got to be considered and enjoy every moment of it! 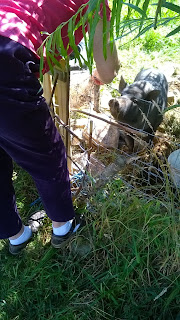 This is my favourite picture of Rebecca so far. She shows how friendly, bonny and alert she is and then, of course, my Mum is in the picture, always open to making new friends, whatever nationality or species. They are both peace workers, in a way. Recently people have been connecting civil rights and animal rights and court cases have been determining the 'personhood' of the most intelligent animals - chimpanzees, elephants, dolphins (although ALL animal senses and values are clearer than the warp of senses and values most people undergo through life). The outcome of the case, one would have thought, would be obvious: The chimpanzee gets to live out the rest of its life at a sanctuary or rehabilitated to the wild and the perpetuators of his captivity must give a formal apology for the twenty year solitary confinement he endured and contemplate the surgery and experiments done on him and his kind as wrong and unnecessary.

Instead the judge looked at the bigger picture - Big corporate interest picture to be precise! She said (and yes I am shocked by how many women in powerful roles are devoid of compassion too) that she 1. wanted to hear the case (cost both sides lots of money to return to court with junior and senior counsels) but 2. she was not considering or going to consider, at any point, the chimpanzee's personhood (this was said in a public statement making the return to court costly and futile). I guess the thing is that if rights to life, freedom from cruelty and exploitation are granted in one instance, there would be a precedent for arguing for the personhood of any animal. We have all met dogs, horses, cats and farm animals with great characters and sentience. The pharmaceutical, food industry and farmers do not want anyone to consider animals as individual beings who love their lives and express themselves as much as we do.

That doesn't mean the rest of us have no choice. We make our choices via what we buy. We can buy organically sourced remedies and medicines developed by organizations that do not test on animals. We can eat vegan food and bring an end to factory farming, by refusing what they produce. We can investigate and get conscious of our impact on others. Don't leave the tap running; preserve what is good! Always speak up when you see unkindness to a person or animal; inhibit what is bad! As the Manic Street Preachers said "If we tolerate this, then our children will be next" Don't be turned into a 'gutless wonder'
https://youtu.be/SZzypB5qSSA

The Manics are friends of mine from my studio days and I apologize for having karaoke'd this song at the 'Stop the Kilkenny Central Access Scheme' fundraiser night! I like to think I carried it off but they might not agree! 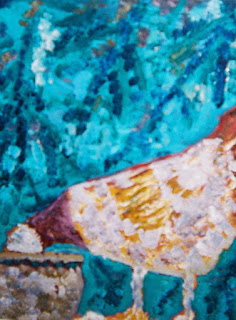 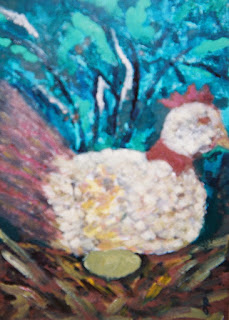 You can call me soft but its a fact of the birds and the bees that hens must live to lay!

So I was in the farm shop asking for pig food. The guy asked 'Do you mean 'pig finisher'? I said I didn't want to finish her off, God knows I've only just got her! He showed me what he had and the ingredients read 'Genetically modified soya, genetically modified maize etc'. (In case you don't know, crops are modified with pesticides. Insects explode if they nibble on a GM stalk. But these crops are all being eaten by the pigs as well. Fatal for an insect means toxic at very least for the pigs and the people that eat them. Glysophates and neonicotinoids are all just there in cancer scans, everyone knows this so why are they still eating meat? Its so gormless and destructive on so many levels. I asked for an organic feed and he replied 'the only thing we have is layers pellets'. It took me a few attempts to establish what he was talking about. Maybe layers pellets are obviously hen food to others but how can you take the hen out of the laying? Its not a production line, there are living beings plopping those eggs out, the majority of which will have never clucked or seen daylight and only consider for the briefest of moments what happens to the male chicks.

All I ask is that you start to recognize the personhood of every other living being. This recognition and acknowledgment is as well, handily, the path to joy.

Posted by Healing by Franc at 5:41 AM