The Learning For Everyone In a Swelling 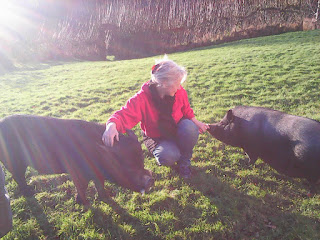 I noticed Becky had a swelling in front of her back stifle joint. As she is very pre-Raphaelite in shape I had not noticed at first. I wondered if she had got a bang or a strain trying to get under the fence, as Legend has long since been able to jump over the 3 feet, like a show jumping pony pulling his hind legs up close under himself, to clear the wire. Well then I wondered if it was a cyst as it was quite hard. I contacted Aisling Hurley, great friend and natural health foods and remedies expert and she recommended Serrapeptase that absolutely breaks down cysts or a homeopathic remedy, Silica.

I feared it was a cancer as it is so difficult to buy organic food for the animals. The feeds are all called things like Pig Finisher and Flaked Natural Barley. For the first, the clue is in the name, the pig needs only put on weight and then it is to be finished off via electrocution, gas and a slash to the throat (very humane I gather, although I don’t remember the Nazis choosing those killing methods out of decency). Anyway the ‘natural’ labels mean absolutely nothing. It’s like the ‘Green’ brand of Bord Bia. It just means it came from Ireland, no other ethical criteria, or environmental criteria. Like Irish Rooster Potatoes having been sprayed up to 30 times with Round Up carcinogenic pesticide in their short spell in the ground. Hey, that’s funny, Round Up too was originally designed as a weapon of war. All the chemical weapons, nerve gas and agent orange etc, had to be repurposed as pesticides and herbicides, once the war was technically over.

This is Rod an interview with Calder Potts from Highbank explaining the original move from traditional methods to dependence on chemicals, once weapons, only 50 years ago

So, back to Becky! I turned to google and a national hog farmer website came up trumps with the description of a bacteria that is everywhere, that causes swelling of the joints, lameness, eventual recumbency and death. It was beyond penicillin, the swellings are filled with pus and there’s very little you can do except cash her in and quickly make her into a round of sausages. I called the vet with my information and he said he would come in the afternoon.

What a diamond, from Lithuania. His mother was into macrobiotic medicine and he was perfectly honest that his main experience of pigs was of their 5 month cycle….5 month frigging cycle. They are really not supposed to live a moment longer, I suppose, in case the hideous GMO food and pesticides we are feeding them, the horrific living conditions in which they’re kept in confinement and their violent death all start to show: A bit like the Portrait of Dorian Gray. On the surface a perfectly nice dish, behind the scenes a brutality being kept under wraps. 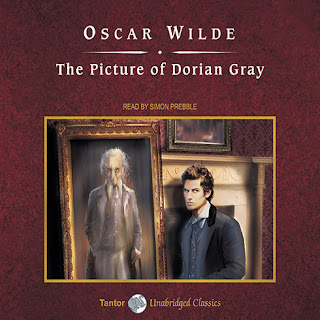 So both Becky and Legend were buried deep in their straw bed and both inquisitively poked just their heads up when the vet and I came in. He put his stethoscope to her heart and listened. This is where the problem is. He also took her temperature for which such a bedside manner didn’t work so well. Trying to stick a thermometer up her bum led to an extremely stressful 2 minutes for everyone. He had to hold on to her tail as she attempted to disappear around the house. She was making a noise like a fan, continuous and getting all the time faster and faster. Legend ran to her and comforted her in her agitation. This is a step forward for Legend who would, in the past, have rammed any of us who upset Becky. Anyway, her temperature was perfect!

Because they have a metabolism that makes them put on weight, from practically thin air, Rebecca had gained too much weight and her chubby cheeks and nearly all of her is edema, including the swelling. Edema is the abnormal accumulation of fluids within the tissues of the body and it has been cramping her style and her organs, it turns out. He suggested a diet – bran, as it has no calories in it and some contains some goodness for her circulation. On line, I found that Blackstrap Molasses, parsley and apple cider vinegar are all incredibly good for the heart and circulation. Thankfully all these things are around: Mega amounts of parsley are growing at the Community Garden in Bagenalstown where I go, who I’m sure will donate a little to Becky’s wellbeing! The apple cider vinegar, interestingly, is part of my chocolate cake recipe! The molasses is an ingredient in my bread recipe. I better share those recipes and photos again too, now I think of it, as the kitchen might be starting to sound rather eclectic! 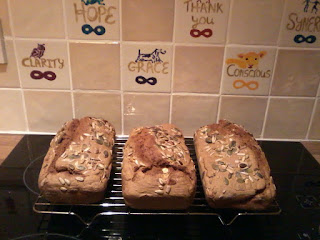 The great news was that she did not have any bacteria, no parasite burden and was essentially very healthy and happy. She meandered around the lawn as we spoke, wagging her tail in happiness and nibbling the grass. The vet was not sure how I would get her weight down as she finds nearly everything appetizing. I reassured him the grass was no longer rich at this time of year and we have a system in place to feed her separately from Legend.

Most pig owners are interested in weight gain and often a hysterectomy is given so the females gain weight after producing their last litter – probably without anaesthetic like the tail cutting, the castrating, the tooth pulling and the ear piercing. This vet had never met a pig of four years old before. You could tell he liked the scene. I guess it must be refreshing when you’ve studied for seven years, to qualify and know how to treat and care for animals, to meet some unexploited ones, whose fate is not a foregone conclusion and whose value is not monetary.

I asked if the swelling could be a cancer caused by the chemicals and genetically modified corn and soy in animal feed. He said that was very unlikely. I am so glad Becky hasn’t got that but isn’t it very convenient that most animals are killed before the effects of their food can show up? I am reminded of Monsanto’s tests on his chemicals. After 9 months, the rats showed no symptoms and the tests were finished and the products approved. But a control group, who kept the mice ingesting Monsanto’s glysophate for more than a year looked like this. 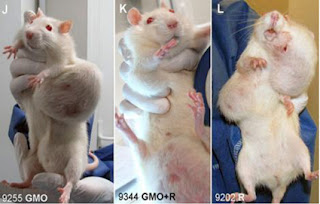 Bear this in mind when you’re picking cheap vegetables. I really really really recommend buying less, wasting none and eating only organic food. At least peel every non organic item to reduce the residual chemicals being eaten. One last bit of bad news is that you can’t flush glysophate out of your body, it is ‘accumulative’. Well, I can but you need to get your head around the energetic nature of things to do it. You might think, I’m grand, so my kids are grand. However children now are under much more pressure than you were as the ‘safe amount’ farmers are allowed to spray on a crop has quadrupled. Amounts are now sprayed that were deemed completely toxic in the past.

Thinking about beloved Becky who is already trimming up and getting in shape, I have loved the insights that came from the wwoofers (‘willing workers on organic farms’ that I have here), the natural health and remedies knowledge, Drazen, the vet’s examination and really wanting to help her, my clent’s homeopathic knowledge being applied and my own investigation, love and insight process. 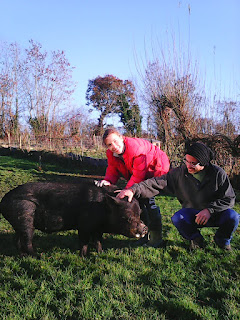 I realize we have so much more to learn about looking after animals, especially those that we want to live a full life.

Interview with Becky and Legend
Posted by Healing by Franc at 4:46 AM