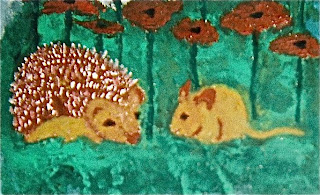 Its very interesting to be on the eve of the 21st December 2012. Been looking forward to it for a long time... or had it in mind at least. On one occasion in 2007 ish, Michael Rice and I worked out we needed to perfect getting into a tetrahydral shape so that we could exist in light particle form, during a super nova and return to solid form, if and when the dust settles. More recently, I've been holding a space for many people challenged by the increasing chaos and resistance.

I have started looking beyond this date though, in an optimistic way, to February 19th 2013. Then, I gather, the planet's kundalini energy will have established itself fully and feminine aspects of intuition and grace will be the main forces of nature. Obviously women won't have a monopoly on them, everyone will be on a roll.

Back to tomorrow though... I thought I wanted a quiet day at Harmony Hall for full consciousness but it looks like it will be more action packed. A clearing at 8am, another at 4pm, more at 8pm, the sauna in-between and hopefully a ride on beloved Windy. Please feel free to text at any time for technical support. My only advice would be to hold peace in your heart and trust that you are one of the few who is not attached to too much drama. You are well able to go with the flow and appreciate every moment as a gift...however different or similar to the previous one!! Think its going to be a magic solstice.

The shamanic journey was fantastic on Monday, thank you Tony and dinner delicious, Jani. There'll be another Conscious Community get together in January. Don't mix up this community with the new Kilkenny Community Radio. Two presenters came and did an hour long interview with yours truly, which they loved. I obviously cleared them to within an inch of their lives and they went away on a buzz and excited to air the possibilities. Then Jani made them supper and was interviewed on recipes and technique as he went along...Strangely, an hour before the show, that sunday, the show was pulled-not allowed to air!

Somehow positivity and awareness are against broadcasting laws these days! The editor said people wouldn't understand! From my very useful reverse psychology perspective, it made me realize I really do have something crucial to say. It made me glad of this blog too. Don't everyone else forget to say what you want, when you want to. Don't let anything hold you back! Fx
Posted by Healing by Franc at 2:32 PM